My Washington Times Review Of "Storm Over Leyte: The Philippine Invasion And The Destruction Of The Japanese Navy' 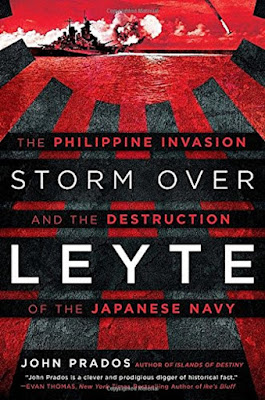 My review of John Prados' Storm Over Leyte: The Philippine Invasion and the Destruction of the Japanese Navy appeared in the Washington Times.


I didn’t much care for John Prados‘ “Vietnam: An Unwinnable War,” from the title on down. I haven’t read the anti-Vietnam War activist’s books on the CIA, but a friend who is most knowledgeable on intelligence matters called these books “rather foolish.”
Yet I tackled Mr. Prados‘ latest book, “Storm Over Leyte: The Philippine Invasion and the Destruction of the Japanese Navy,” as I have a strong interest in the October 1944 Battle of Leyte Gulf, an engagement that has been called the largest and perhaps the greatest naval battle in history. I’m also interested in the naval battle as my late father, a U.S. Navy UDT frogman, participated in the invasion of the Philippines.
Other historians have covered this famous battle extensively in their books, including Samuel Elliot Morison and John Toland, but Mr. Prados provides the most up-to-date information from diaries, recently released government documents, declassified intelligence reports, and postwar interrogation transcripts.
He also offers more information than most books on the key role of intelligence in the battle. I found his passages on the Joint Intelligence Center Pacific Ocean Area (JICPOA), called the “Zoo,” the Fleet Radio Unit Pacific (FRUPAC), and other intelligence units to be most interesting.
“The focus here on intelligence opened the door to a huge array of information that was unknown or poorly understood. That carried us a considerable way towards providing a fresh view of this crucial battle,” Mr. Prados writes.
The heroes of the sea battle are the gallant and bold sailors and pilots who fought on aircraft carriers and other ships, but this book also offers the contributions of unsung heroes — the intelligence officers, Japanese linguists, cryptologists and radiomen who provided the American commanders with critical information about the Japanese Navy.
You can read the rest of the review via the below link:
http://www.washingtontimes.com/news/2017/jan/8/book-review-storm-over-leyte-the-philippine-invasi/
Posted by Paul Davis at 3:22 AM

Labels: and the Destruction of the Japanese Navy, John Prados, My Washington Times book Review, naval history, Storm Over Leyte: The Philippine Invasion, The battle of Leyte Gulf, WWII history