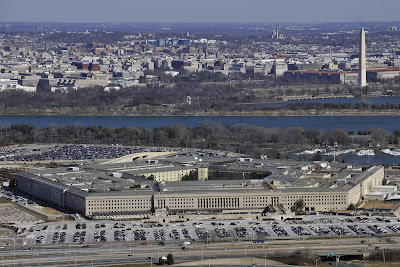 Morgan Chalfant at the Free Beacon offers a piece on the Joint Chiefs' warning about terrorist and criminal groups cooperating.


Criminal and terrorist networks are evolving “out of view” of U.S. intelligence and increasingly cooperating to achieve their goals, according to a new document from the U.S. military that calls for a better coordinated effort between the Pentagon and other government agencies to counter threat networks.
It is becoming increasingly difficult for the United States to deter threats from transnational networks such as terrorist organizations and groups trafficking illicit goods, according to the document from the Joint Chiefs of Staff published in late December.
The Joint Publication 3-25, which was recently highlighted by the Federation of American Scientists, evaluated the United States’ efforts to counter networks threatening U.S. interests at home and abroad, calling for more interagency work and partnerships with international organizations and allies to deter them.
“Traditional threats like insurgencies and criminal gangs have been exploiting weak or corrupt governments for years, but the rise of transnational extremists and their active cooperation with traditional threats has changed the global dynamic,” the document dated Dec. 21, 2016, stated. “Successful deterrence and elimination of these illicit networks is more complicated and less predictable than in the past.”