The Leper Spy: The Story Of An Unlikely Hero Of World War II 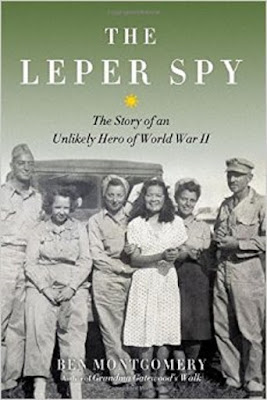 Veteran journalist and author Joseph C. Goulden offers a good review in the Washington Times of Ben Montgomery's The Leper Spy: The Story of An Unlikely Hero of World War II.


How does one respond when a formerly comfortable world is suddenly reduced to rubble? Consider the plight ofJ osefina Guerrero, a young Filipina married to a physician, happily raising a daughter in Manila.
First came a debilitating illness which proved to be leprosy — a disease so frightening that afflicted persons were required to ring a bell and carry a sign indicating they were contagious if they walked on the streets. (Such a fear, in fact, was overblown.) Her beloved daughter was turned over to relatives.
Then came the brutal Japanese invasion of 1941, which quickly overpowered American and local defense forces. The occupiers seemed determined to behave with unbounded cruelty toward civilians.
As her body wasted away, Josefina prayed. And one day “she had an epiphany: if she believed anything, it was that even the lowliest could be a vessel, could be of service to the great good . If she was going to die, she would do so with dignity, face her fate with honor.”
So she approached a friend she knew was with the resistance. “I want to be a soldier,” she told him. And began her covert career as a spy.
You can read the rest of the review via the below link:
http://www.washingtontimes.com/news/2017/jan/11/book-review-the-leper-spy-the-story-of-an-unlikely/
Posted by Paul Davis at 11:15 AM