My Washington Times Review of 'Forging the Star: The Official Modern History of the United States Marshalls Service’ 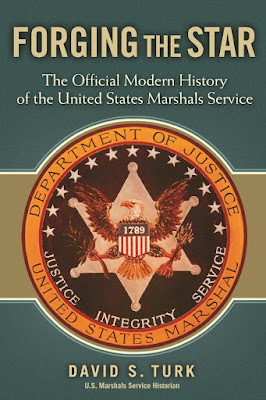 My review of David S. Turk's Forging the Star: The Official History of the United States Marshals Service appeared in the Washington Times.


The U.S. Marshals Service may be the oldest U.S. law enforcement agency, but it is perhaps the least known and understood by the general public. Most of us who grew up in the 1950s and 1960s know the U.S. marshal from TV and the movies. From John Wayne to Hugh O’Brian, the TV/movie frontier deputy U.S. marshal was a symbol of law and order during a generally lawless time and place.
More recently, viewers saw the modern deputy U.S. marshal depicted in the film “The Fugitive” by Tommy Lee Jones and on TV by Timothy Olyphant, who portrayed Elmore Leonard’s character, U.S. Deputy Marshal Raylan Givens, in the series “Justified.”
For the real deal, David S. Turk’s “Forging the Star: The Official Modern History of the United States Marshals Service” offers the story of the Marshals Service and how they have observed, enforced and made modern U.S. history.
Mr. Turk, the U.S. Marshals Service historian, has written an interesting book that covers the Marshals Service and its involvement with the integration of the University of Mississippi, the federal trial of Teamster President Jimmy Hoffa, the violent confrontation at Ruby Ridge, the aftermath of Hurricane Katrina, and other modern historical benchmarks.
You can read the rest of the review via the below link:
http://www.washingtontimes.com/news/2017/jan/3/book-review-forging-the-star-the-official-modern-h/?utm_source=RSS_Feed&utm_medium=RSS
Posted by Paul Davis at 1:23 AM