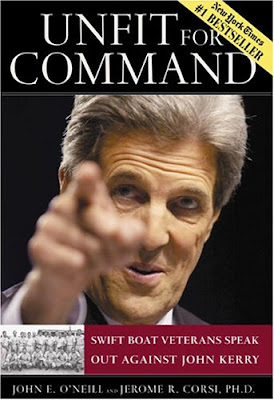 Wesley Pruden at the Washington Times offers his view of outgoing Secretary of State John Kerry.


John Kerry doesn’t come late to the betrayal of friends. He has had considerable practice.
In 1971, when he was a young lieutenant just back from Vietnam, where he was a decorated skipper of a Swift Boat patrolling the Mekong River, he appeared before the U.S. Senate Foreign Relations Committee to pay his “respects” to the American soldiers, sailors and Marines he fought a war with.
Representing all those veterans, he told the senators, he wanted to talk about war crimes he said “were committed on a day-to-day basis with the full awareness of officers at all levels of command.”
Mr. Kerry proceeded to slander and defame hundreds of thousands of young Americans who were serving at their country’s call in a distant place where none wanted to be, doing their best at achieving the impossible.
Most of us who were there as observers and witnesses — I spent the better part of three years in Vietnam and Southeast Asia as a newspaper correspondent — saw ugly anger at work, the brutal way of war since Cain picked up a stone to slay his brother Abel. Occasional violence verged on atrocity, but we saw kindness and mercy in the midst of the noisy clangor of killing.
Mr. Kerry testified that he saw his country only at the work of atrocity, young men, many of them highly decorated, merciless in pursuit of barbarism. He told of swapping war stories with men who “personally raped, cut off ears, cut off heads, taped wires from portable telephones to human genitals and turned up the power, cut off limbs, blown up bodies, randomly shot at civilians, razed villages in fashion reminiscent of Genghis Khan, shot cattle and dogs for fun, poisoned food stocks, and generally ravaged the countryside of South Vietnam in addition to the ravage of war, and the normal and very particular ravaging which is done by the applied bombing power of this country.”
Old soldiers who served with him on the Mekong were astonished at his fanciful recital of comic-book war story, and gave their eloquent version three decades later when Mr. Kerry was the Democratic candidate for president. They said he was full of it, “it” being neither heroism nor witness to truth. He was a phony, Purple Hearts and Bronze and Silver stars or not.
You can read the rest of the piece via the below link:

http://www.washingtontimes.com/news/2016/dec/29/john-kerrys-practiced-betrayal-of-friends/?mkt_tok=eyJpIjoiWWpJeE1XTXdObU13T1RZMCIsInQiOiJlbmZQM3A1MkRUWFF0ZVQ0SEd1cTBTaEUwYWdOOXZzajhwVm05ZUJvcitaVklcL2d1eWNtMUFUSFZTeW5hSmw1WmIrNytjVnp4RkdTNUZkM09JTlUxRTlNOHk4aFwvZFVkblNqMVk5bjlSSVwvVW8yVUhtQzBlRjR1Rks4QVFwZGNjdiJ9
Posted by Paul Davis at 9:57 AM