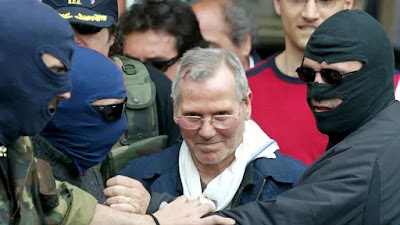 Barbie Latza Nadeau at the Daily Beast offers a piece on the Cosa Nostra boss who orderedthe death of his doctor.

When urologist Attilio Manca was found dead with two heroin needles still sticking out of his wrist and elbow in 2004, none of his friends believed for one minute he had overdosed. For one, Manca, who died alone in his home, was left-handed and the needles were stuck in his left wrist and elbow, which would not have been a natural way to inject the drug. A distinct lack of fingerprints on the syringes still protruding from the doctor’s body were also suspicious. Even had the doctor been careful, he likely would have left at least one print on the plunger. And his friend, a nurse named Monica Mileti, who was ultimately convicted of selling him the fatal heroin and sentenced to five years in prison, just didn’t fit the bill of a drug pusher.

This week, after Mileti pushed to have her case re-examined, Italy’s high court agreed that she had not sold the doctor the heroin and cleared her name. The court also ruled that Manca had not in fact died of a self-inflicted heroin overdose, but a mob-ordered one after Italy’s anti-mafia parliamentary commission investigated the case. Manca, who was born in Sicily but died in Viterbo, near Rome, it is now believed, was secretly flown to France to operate on Bernardo Provenzano, the top boss of the Sicilian Cosa Nostra, while he was in hiding.

Provenzano, who was famously arrested in a farmhouse in 2006 after 43 years on the run after police traced his freshly ironed shirts from his wife’s house to his hideout, died in prison in 2016. Several turncoats testified that Manca had been summoned to France to treat Provenzano's prostate cancer and that Provenzano was so afraid the doctor would rat him out and tell authorities where he was hiding, the capo dei capi or boss of bosses ordered his death. Manca had performed the first laparoscopic prostate surgery in Italy and had a reputation as a skilled surgeon.

You can read the rest of the story via the below lnk: