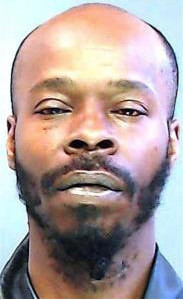 The man who was riding around yesterday in a U-Haul with a dismembered human torso in back is a registered sex offender with a long rap sheet featuring more than a dozen arrests.

Taray Herring (seen in the above mugshot), 47, of Northeast Philadelphia, was most recently let out of jail last June on a burglary rap, after a judge decided Herring didn't have to post any bail.

That meant that Herring didn't have to post a cent to get out of jail. And where was the D.A's office on that request? "By agreement of the Commonwealth," court records say, the D.A.'s office went along with the public defender's motion to spring Herring.

District Attorney Larry Krasner and Jane Roh, his spokesperson, did not respond to a request for comment.

Krasner and Roh also declined to explain why, a year before the burglary arrest, in 2019, the D.A.'s office gave Herring lenient treatment. They let him plead guilty to a misdemeanor and granted him probation in a plea bargain for stealing a car, when the D.A. could have put prosecuted Herring on felony charges, and kept him in jail.

In both 2019 and 2019, Herring was accused of violating his parole, with both the stolen car arrest and the burglary arrest. But both times the D.A.'s office gave Herring a pass and let him back out on the street.

Last June, the D.A.'s office did one more favor for Herring: they asked a judge to waive a detainer filed by the county Probation Department against Herring that would have kept him in jail without bail until a hearing on the probation violation would have been held. That's why criminals call our D.A. "Uncle Larry," because he's their best friend.

At 9 .m. yesterday, police got a call about a burglary in progress involving a U-Haul truck parked outside a house at 1011 Sanibel Street. When the cops arrived at the scene, they observed a U-Haul truck with Arizona license plates traveling south of Kelvin Avenue.

"The vehicle pulled over, and as soon as the officers got out of the car the driver of the U-Haul just came right out the door and said, 'I don't want anything to do with this,' and 'There's a body in the back,'" Sgt. Eric Gripp told 6ABC.

Officers searched the back of the van and found a trash bag with a dismembered human torso inside.

Herring, along with the driver, David Kirby, 43, didn't attempt to escape and both were taken into custody, Sgt. Gripp told 6ABC. A police source said that neither man has been charged, but that Herring confessed to having dismembered the victim's body.

Last night, police found a human leg and a hand in a dumpster behind a nearby Wawa at Kelvin Street and Bustleton Avenue. 6ABC reported. Police said the body parts could belong to the same victim. Sgt. Gripp told 6ABC that police had been summoned by a neighbor to check up on Peter Gerold, a masseuse who operated out of his house on Sanibel Street. Neighbors told cops that Gerold was missing, and so were his cars.

Herring, after he was Mirandized, gave a voluntary statement where he claimed that he didn't kill the victim, but he did dismember him. According to police records, Herring told the cops that he deep fried body parts, wrapped them in plastic, and disposed of them in various dumpsters in the 10800 block of Proctor Road.

Kirby told the cops he was helping Herring dispose of trash from the house and claimed he was initially unaware that a human torso was in one of the trash bags. Police recovered other human remains from various dumpsters and transported them to the Medical Examiner's office.

Police recovered blood swabs, a knife, and burnt clothing from the burglarized home. In the U-Haul, in addition to the human torso, the cops found numerous bloody saws, a pair of gloves and kitchen utensils.

Herring, according to the cops, is a registered sex offender who lived in an apartment at 600 Red Lion Road. He's described as a 5-foot-7, 160 pound black male who's bald and has a tattoo on his chest.


On May 8, 2020, Herring was arrested and charged with burglary, criminal trespass that resulted in bodily injury, theft, receiving stolen property, and criminal mischief. A month later, he got out of jail without having to post bail.

Since Herring got out of jail, the preliminary hearing in his case was canceled twice, and continued twice. The most recent continuance was on Jan. 6th, after a request was made by his lawyer.

Herring has a busy rap sheet which in recent years shows some favorable treatment from the D.A.'s office under Larry Krasner.