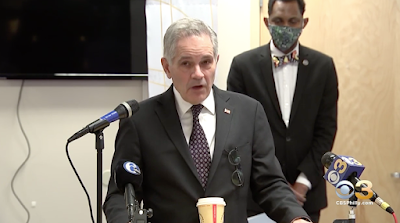 Ralph Cipriano at BigTrail.net looks at the outside progressive money Philly DA Larry Krasner is shoveling in.

The Real Justice PAC of San Francisco has been pouring cash, in-kind services and even rent money into Krasner's reelection campaign, to the tune of more than $100,000.

The only problem: the city of Philadelphia's legal limit on yearly contributions from PACs is just $12,600. That's why the city's Board of Ethics is monitoring the "Lawrence Krasner For District Attorney" campaign committee, and the contributions they've been raking in from the Real Justice PAC.

Because both the D.A.'s campaign committee and his favorite PAC are known offenders. Two years ago, the Board of Ethics finalized an agreement that called for both the Real Justice PAC and Krasner's campaign committee to fork over a total of $23,000 in fines and "disgorgements" [or forfeits] for breaking city election laws back in 2017 with donations over and above the city's legal limits.

And now with Krasner running for reelection in the May 18th Democratic primary, both the Real Justice PAC and the D.A.'s campaign committee are at it again. According to Real Justice's filings last year with the Federal Election Commission, the PAC listed as campaign contributions to Krasner a $25,000 donation made on April 15, 2020, and a $50,000 donation made on July 30, 2020.

Real Justice isn't talking; neither is Krasner nor his campaign committee. But J. Shane Creamer Jr., executive director of the city's Board of Ethics, is watching.

"I'm aware of all their public filings and I have no comment," Creamer said.