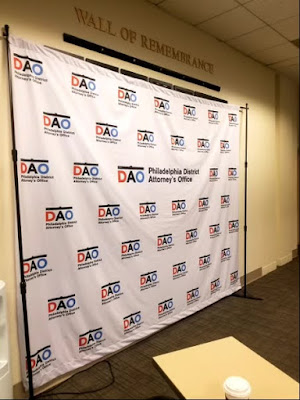 Ralph Cipriano at Bigtrial.net offers a piece on Philly DA Larry Krasner covering up the “Wall of Remembrance’ that honors cops killed in the line of duty.

In a move that's sure to offend every cop in the city, District Attorney Larry Krasner's office has covered up a "Wall of Remembrance" that features dozens of plaques honoring hero cops who died in the line of duty.

The Wall of Remembrance is located on the mezzanine level outside the Ray Harley Conference Room at the D.A.'s office at 3 S. Penn Square.

"A fucking disgrace," said one cop. "Here's what Krasner thinks of cops who have died in the line of duty," texted another cop who sent along the photo at right.

In the photo, the wall is covered with a sheet that bears repeated images of DAO logo of the Philadelphia District Attorney's Office.

We already knew that Larry Krasner hates cops. When he was a defense lawyer, he sued the police department 75 times. At his victory party, the crowd chanted "Fuck the FOP."

But this move is over the top.

"He [Krasner] has been pissing on cops his whole career," McNesby wrote in an email. "This is a whole different situation when you smear the memories of those that gave their lives protecting the community in the line of duty."

"Those in the Law Enforcement community sadly know what kind of person he is," McNesby said. "More of a reason to move him out of that position."

The FOP has endorsed Carlos Vega for D.A., Krasner's opponent in the May 18th Democratic primary.

As he has done for the past 19 months when fielding questions from Big Trial, Krasner didn't immediately respond to a request for comment. Neither did Jane Roh, his alleged spokesperson.

… There's at least 40 Philadelphia police officers who are assigned to work in the D.A.'s office. One of those cops was pissed when he saw the picture of the covered up Wall of Remembrance.

"Fuck him. That's blatant disrespect," the cop said about Krasner.

"How could a Philadelphia police officer walk into that building with his or her head held up high when the D.A. has covered up the faces of their brothers and sisters killed in the line of duty," said another cop.