On This Day In History The St. Valentine’s Day Massacre Occurred 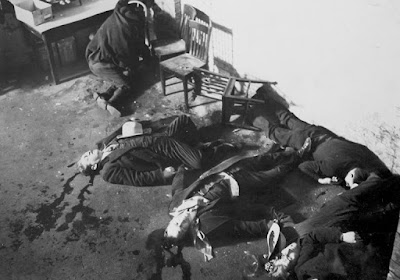 As History.com notes, on February 14, 1929, the Saint Valentine’s Day Massacre occurred in Chicago.

The St. Valentine’s Day Massacre shocked the world on February 14, 1929, when Chicago’s North Side erupted in gang violence. Gang warfare ruled the streets of Chicago during the late 1920s, as chief gangster Al Capone sought to consolidate control by eliminating his rivals in the illegal trades of bootlegging, gambling and prostitution.

This rash of gang violence reached its bloody climax in a garage on the city’s North Side on February 14, 1929, when seven men associated with the Irish gangster George “Bugs” Moran, one of Capone’s longtime enemies, were shot to death by several men dressed as policemen. The St. Valentine’s Day Massacre, as it was known, remains an unsolved crime and was never officially linked to Capone, but he was generally considered to have been responsible for the murders.