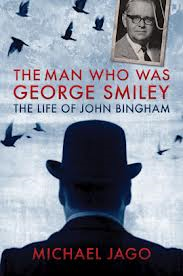 John Bingham, seventh Baron Clanmorris of Newbrook in the County of Mayo, always drank at the bar holding his glass in his left hand, despite being right-handed. The reason was to be found in his right pocket. “He always had a knuckleduster among the change,” explains his daughter, Charlotte.

“As a child, I just thought everybody did.”


There was the sword stick, too. And a revolver. And lock picks, for a little light breaking and entering. “I was about five when I found the revolver,” says Miss Bingham. “It was in a chest and my mother said, 'Go and get me this manuscript.’ And I pulled it out and underneath was hidden this gun, and I picked it up – as children do – and said, 'Ah! Look, a gun. What fun.’
“I became aware of what he did for a living when I was 18. He told me about this secret life. He would say to my mother, 'I can’t do such and such tonight.’ She’d say, 'Why not?’, and he’d say, 'I’ve got to do a burglary.’ ”
John “Jack” Bingham was one of the most effective intelligence officers produced by the security service, MI5, during the Second World War.

... Tinker, Tailor, Soldier, Spy and Smiley’s People are successful on page and screen because of their seeming approximation to reality, presenting the secret world as a cynical layman would imagine it to be: shabby, morally ambiguous, an arena in which cruel and ultimately pointless games of life and death are played out. In le Carré’s world, there are few really good guys.

Jack Bingham did not concur. Until his death in 1988 he retained an iron belief in the rightness of his cause, the defence of the British way of life. Imperfect it may have been, but it was better than all the rest. The agents Bingham ran in war and peace, fighting firstly fascism and then communism, were to him people of courage and honour, often humble and unselfish, acting for the best of intentions.

Le Carré, believed Bingham, ignored this noble aspect of secret work, seeking to establish moral equivalence between East and West. Jack, who enjoyed a successful subsidiary career as a crime writer, was dismayed by his former colleague’s reworking of history and told him so.

Note: John Binham is the subject of Michael Jago's book, The Man Who Was George Smiley: The Life of John Bingham.
Posted by Paul Davis at 12:00 AM