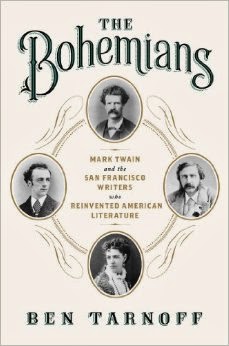 The Daily Beast offers a piece on Ben Tarnoff's The Bohemians: Mark Twain and the San Francisco Writers who Reinvented Literature.

“All modern American literature comes from one book by Mark Twain called Huckleberry Finn,” Ernest Hemingway wrote in 1935, and that book’s continuing ability to discomfit and enrage testifies to the power of Twain’s prose. He captured in print the blunt rhythms and salty wit of American colloquial speech, creating a distinctive national literary language that shaped the work of every writer who followed him. But he wasn’t alone in his quest to liberate American culture from sanctimony and sentimentality—a vibrant San Francisco publishing community played an instrumental role in helping Twain find his voice during a few seminal years in the 1860s, decades before Huckleberry Finn was published.

This community is the focus of The Bohemians, Ben Tarnoff’s lively chronicle, which links Twain to three lesser-known writers in a fellowship of self-styled “Bohemians” who, in Tarnoff’s words, “would bring a fresh spirit to American writing, drawn from the new world being formed in the Far West.”