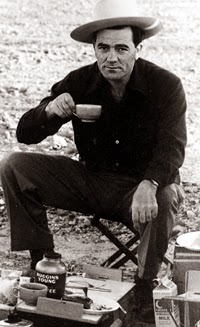 As Biography.com notes, Western writer Louis L'Amour was born on this day in North Dakota in 1908.

Louis L'Amour published several short stories, but it was his first Western novel, Hondo (1953), that gained him instant success. While L'Amour later wrote works in different genres, it was his many Westerns that gained him great popularity among readers. L'Amour died on June 10, 1988, in Los Angeles, California. Having written more than 100 books and 400 short stories, he remains one of the most prolific and popular authors in the world.

You can also visit Louis L'Amour's web site at www.louislamour.com.
Posted by Paul Davis at 2:59 PM