Serial Killers: The FBI Looks Back At Andrew Cunanan 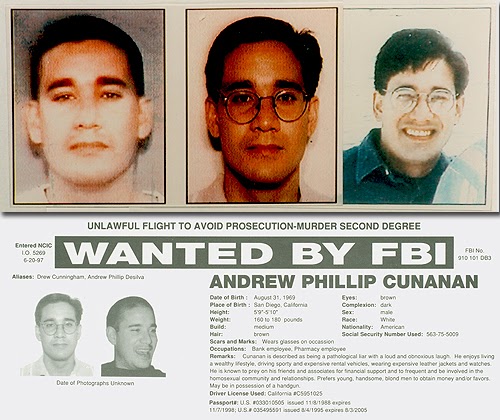 Around 8:45 on the morning of July 15, 1997, international fashion designer Gianni Versace returned home to his Miami Beach mansion on Ocean Drive following a walk to a local café.
Suddenly, a man approached Versace, pulled out a pistol, and killed him with two shots to the back of his head. The man fled—followed at a distance by at least one witness—and disappeared into a nearby parking garage.

Miami Beach homicide detectives soon asked for assistance from the FBI’s local field office in the city. The officers were concerned that the killing might be a murder-for-hire, but evidence quickly suggested that it wasn’t. Inside the parking garage identified by the witness was a red pickup truck linked to a murder in New Jersey and a man named Andrew Phillip Cunanan, the target of an ongoing manhunt.

Cunanan was a 27-year-old college dropout from California. He was highly intelligent, spoke two languages, and since his teenage years had sought to live a life of riches and comfort. He had supplemented his earnings from an odd job here and there by serving as a male prostitute and engaging in longer-term liaisons with older homosexuals who would shower him with gifts and cash.

For reasons that remain unclear, Cunanan had begun a murderous spree in late April 1997.