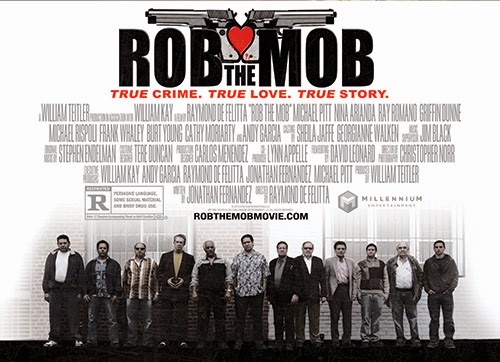 Don Steinberg at the Wall Street Journal offers a piece on a new film about organized crime called Rob the Mob.

"Rob the Mob," the latest film from director Raymond De Felitta, shares certain key traits with his prior movies. It is based in a blue-collar neighborhood of a New York borough. It features a lively script and fleshed-out characters who explode with heart, played by surprisingly recognizable actors for an indie film (including Andy Garcia and Ray Romano). And it's destined to be severely underappreciated.

... Set in 1992 and based on a true story, "Rob the Mob" tells of a young Queens couple who become a working-class Bonnie and Clyde. Tommy (Michael Pitt of "Boardwalk Empire") is an ex-con without a plan until he discovers, by watching the trial of mobster John Gotti, that in mafia social clubs they don't keep any guns on the premises. He figures they're ripe for robbery and gets himself an Uzi. Exacting revenge on the kind of wiseguys who harassed his father is a bonus. Nina Arianda, a Tony-Award winner who played the sassy secretary in the movie "Win Win," steals scenes as Tommy's devoted girlfriend and accomplice. Their crime spree attracts the attention of a newspaperman (Mr. Romano), a philosophical mob boss (Mr. Garcia), and the FBI.