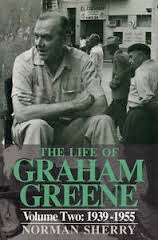 
British writer Graham Greene came to Switzerland to live out his old age. His final resting place near Vevey is a far cry from the dangerous and exotic locations of his greatest works.
Greene died on April 3, 1991, in the village of Corseaux, just outside Vevey, after spending his last few months with companion Yvonne Cloetta in a modest flat overlooking Lake Geneva and the French Alps.

Today, his grave in the tiny cemetery in Corseaux is overlooked by those same mountains and the vineyards for which this region is famous.

The headstone, designed by the man responsible for Greene's Penguin book covers, is plain compared with the other graves in the cemetery. It simply says: Graham Greene 1904 – 1991.

"He would not have wanted anything ostentatious," says Greene's daughter, Caroline Bourget, who lives in Vevey.

It's a peaceful last resting place for a man who became renowned for travelling to and writing about some of the more exotic and dangerous places in the world – the Congo, Sierra Leone, Mexico and Cuba.

Note: As a teenager I read all of Graham Greene's thrillers, which he called his "entertainments," and I later read his "serious" novels as well.

Although I don't subscribe to his worldview, I've enjoyed his books and I've reread many of them over the years.

While I was stationed on a Navy harbor tugboat at the U.S. nuclear submarine base at Holy Loch, Scotland in the mid-1970s, I faithfully watched a British TV series that adapted Greene's short stories.

The TV program was called Shades of Greene and the series led me to read Greene's wonderful short stories, such as The Invisible Japanese Gentlemen.

I still have many of Greene's Orange Penguin paperbacks that I bought in Scotland on a bookcase in my basement office/library.
Posted by Paul Davis at 4:59 AM