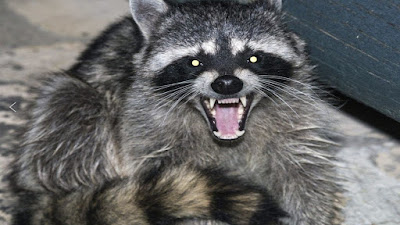 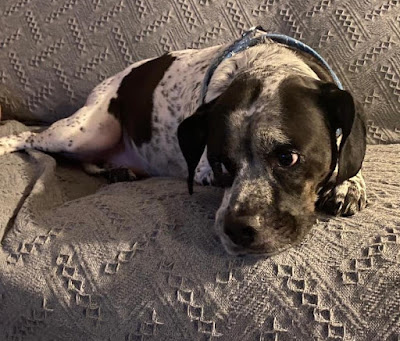 “There are famous grudges in history: Rome vs. Carthage, Tesla vs. Edison, Minnesota vs. Wisconsin. You can explain them with history, politics, human nature. Nothing explains the vicious quarrel between dogs and raccoons. Nothing we know, that is,” writes James Lileks at the Minneapolis Star Tribune. “Dogs will chase squirrels and voles and rabbits, but it's just business as usual. Nothing personal.

“But raccoons seem to bring out some primal hatred in dogs that turns them into spittle-flecked maniacs, and makes you realize that beneath your pet's lovable-goofus personality is bloodlust born of an ancient feud.”

I know what he means. A few years ago, I was watching my daughter’s dog Mickey (seen in the above photo) over the weekend at my South Philly home. I love this dog and I call him my “Grand Dog.”

I’m a night owl and I tend to work in my basement office late at night. Mickey usually slept in our bedroom with my wife as I worked.

But Mickey, a mid-size, mixed breed, would come downstairs from the bedroom to greet me when I came up from the basement to get something to drink. He knew I would always give him a treat.

At 4 am one weekend morning, Mickey came down and I let him out to do his business in the yard.

As I opened the door, he bolted out and I saw that he was charging a huge raccoon. I pulled out my gun as Mickey leaped on the back of the running raccoon. I was afraid to shoot, as I was feared I might hit Mickey.

I was also worried that the raccoon would bite or scratch Mickey. Mickey had the raccoon pinned to the ground and was bouncing his heavy front paws up and down on the raccoon’s back. Mickey's low, mean growl let the raccoon know he meant serious business.

The raccoon was attempting to turn his head around and bite the dog, but he couldn’t. His paws were outstretched, and I could see his long claws, but as the raccoon was pinned, he could not use them.

I finally grabbed Mickey’s collar and pulled him off the raccoon and the raccoon ran and slipped through a slim opening in our fence.

I brought Mickey in and examined him to see if he was bitten or scratched. Thankfully, he wasn’t.

I called Mickey my hero for defending our property and I gave him a hot dog, one of his favorite treats.

(I read later that pulling the dog off the racoon by the collar was a mistake. This action left the dog defenseless and the racoon could have bitten or ripped him open with his claws. Thankfully, he choose to run away).

You can read the rest of the Star Tribune piece about a dog/racoon fight via the below link:

James Lileks: Ever seen your dog mix it up with a raccoon? I did, and it isn't pretty | Cats & Dogs News | ArcaMax Publishing