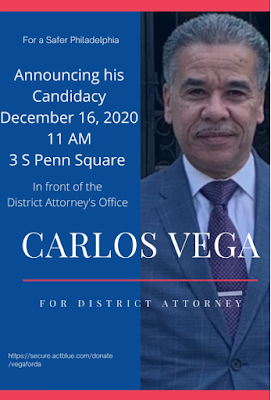 Ralph Cipriano at Bigtrial.net offers a piece on Carlos Vega, a former career homicide prosecutor who is going to run against Philly DA Larry Krasner.

Attention, long suffering citizens of Philadelphia: We finally have an alternative to our current district attorney who caters to criminals, and doesn't give a damn about crime victims. He's Carlos Vega, 64, a career homicide prosecutor in the D.A.'s office who, over a 35-year career, has tried nearly 450 homicide cases, and lost only 14. Next Wednesday at 11 a.m., Vega will be holding a press conference outside the D.A.'s office at 3 South Penn Square to announce his candidacy for the Democratic nomination for district attorney. Vega will be opposing incumbent D.A. Larry Krasner, the George Soros-financed radical whose alleged "reforms" of the criminal justice system have been a disaster for Philadelphia, as witnessed this year by a record murder rate, and a record number of shootings. As a career homicide prosecutor, Vega said, he was in the courtroom every day, acting as the champion for murder victims "who are never heard, who have no voice." "I am here to represent the victims," Vega said. "I've always been the voice for the victims." Watching the murder and shooting rates escalate to historic levels, Vega says, he decided as a career prosecutor, as well as a parent, "I can't sit by and let this happen to my city."