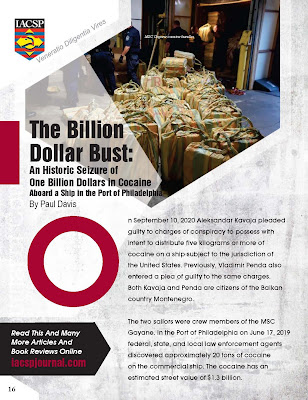 Counterterrorism magazine published my piece on the billion dollar cocaine bust aboard a ship in Philadelphia.

You can read the piece via the magazine pages above and below or the text below: 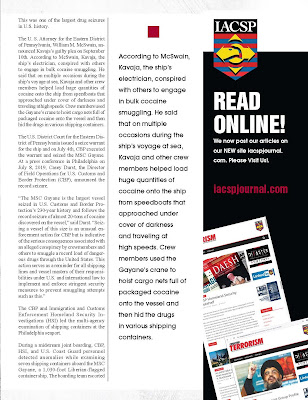 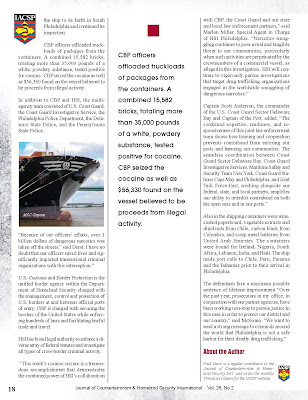 In September 10, 2020 Aleksandar Kavaja pleaded guilty to charges of conspiracy to possess with intent to distribute five kilograms or more of cocaine on a ship subject to the jurisdiction of the United States. Previously, Vladimir Penda also entered a plea of guilty to the same charges. Both Kavaja and Penda are citizens of the Balkan country Montenegro.

The two sailors were crew members of the MSC Gayane. In the Port of Philadelphia on June 17, 2019 federal, state, and local law enforcement agents discovered approximately 20 tons of cocaine on the commercial ship. The cocaine has an estimated street value of $1.3 billion.

This was one of the largest drug seizures in U.S. history.

The U. S. Attorney for the Eastern District of Pennsylvania, William M. McSwain, announced Kavaja’s guilty plea on September 10th. According to McSwain, Kavaja, the ship’s electrician, conspired with others to engage in bulk cocaine smuggling. He said that on multiple occasions during the ship’s voyage at sea, Kavaja and other crew members helped load huge quantities of cocaine onto the ship from speedboats that approached under cover of darkness and traveling at high speeds. Crew members used the Gayane’s crane to hoist cargo nets full of packaged cocaine onto the vessel and then hid the drugs in various shipping containers.

The U.S. District Court for the Eastern District of Pennsylvania issued a seize warrant for the ship and on July 4th, CBP executed the warrant and seized the MSC Gayane. At a press conference in Philadelphia on July 8, 2019, Casey Durst, the Director of Field Operations for U.S. Customs and Border Protection (CBP), announced the record seizure.

“The MSC Gayane is the largest vessel seized in U.S. Customs and Border Protection’s 230-year history and follows the record seizure of almost 20-tons of cocaine discovered on the vessel,” said Durst. “Seizing a vessel of this size is an unusual enforcement action for CBP but is indicative of the serious consequences associated with an alleged conspiracy by crewmembers and others to smuggle a record load of dangerous drugs through the United States. This action serves as a reminder for all shipping lines and vessel masters of their responsibilities under U.S. and international law to implement and enforce stringent security measures to prevent smuggling attempts such as this.”

The CBP and Immigration and Customs Enforcement Homeland Security Investigations (HSI) led the multi-agency examination of shipping containers at the Philadelphia seaport.

During a midstream joint boarding, CBP, HSI, and U.S. Coast Guard personnel detected anomalies while examining seven shipping containers aboard the MSC Gayane, a 1,030-foot Liberian-flagged container ship. The boarding team escorted the ship to its berth in South Philadelphia and continued its inspection.

CBP officers offloaded truckloads of packages from the containers. A combined 15,582 bricks, totaling more than 35,000 pounds of a white, powdery substance, tested positive for cocaine. CBP seized the cocaine as well as $56,330 found on the vessel believed to be proceeds from illegal activity.

In addition to CBP and HSI, the multi-agency team consisted of U.S. Coast Guard, the Coast Guard Investigative Service, the Philadelphia Police Department, the Delaware State Police, and the Pennsylvania State Police.

“Because of our officers’ efforts, over 1 billion dollars of dangerous narcotics was taken off the streets,” said Durst. I have no doubt that our officers saved lives and significantly impacted transnational criminal organizations with this interception.”

U.S. Customs and Border Protection is the unified border agency within the Department of Homeland Security charged with the management, control and protection of U.S. borders at and between official ports of entry. CBP is charged with securing the borders of the United States while enforcing hundreds of laws and facilitating lawful trade and travel.

HSI has broad legal authority to enforce a diverse array of federal statutes and investigate all types of cross-border criminal activity.

“This week’s cocaine seizure is a tremendous accomplishment that demonstrates the combined power of HSI’s collaboration with CBP, the Coast Guard and our state and local law enforcement partners,” said Marlon Miller, Special Agent in Charge of HSI Philadelphia. “Narcotics smuggling continues to pose a real and tangible threat to our communities, particularly when such activities are perpetuated by the crewmembers of a commercial vessel, as alleged in this investigation. HSI will continue to vigorously pursue investigations that target drug trafficking organizations engaged in the worldwide smuggling of dangerous narcotics.”

Captain Scott Anderson, the commander of the U.S. Coast Guard Sector Delaware Bay and Captain of the Port, added, “The combined expertise, readiness, and responsiveness of this joint law enforcement team shows how training and cooperation prevents contraband from entering our ports and harming our communities. The seamless coordination between Coast Guard Sector Delaware Bay, Coast Guard Investigative Services, Maritime Safety and Security Team New York, Coast Guard Stations Cape May and Philadelphia, and Joint Task Force-East, working alongside our federal, state, and local partners, amplifies our ability to interdict contraband on both the open seas and in our ports.”

Also in the shipping containers were wine, coated paperboard, vegetable extracts and dried nuts from Chile, carbon black from Colombia, and scrap metal batteries from United Arab Emirates. The containers were bound for Ireland, Nigeria, South Africa, Lebanon, India, and Haiti. The ship made port calls to Chile, Peru, Panama and the Bahamas prior to their arrival in Philadelphia.

The defendants face a maximum possible sentence of lifetime imprisonment “Over the past year, prosecutors in my office, in conjunction with our partner agencies, have been working non-stop to pursue justice in this case in order to protect our district and our country,” said McSwain. “We want to send a strong message to criminals around the world that Philadelphia is not a safe harbor for their deadly drug trafficking.”

Paul Davis is a regular contributor to the Journal of Counterterrorism & Homeland Security Int’l and writes the monthly Threatcon column for the IACSP website.