Baylon Bee: ‘We Must Follow The Science!’ Screams Actor Who Believes Xenu Dumped Frozen Aliens Into Volcanoes And Exploded Them With Bombs 75,000,000 Years Ago 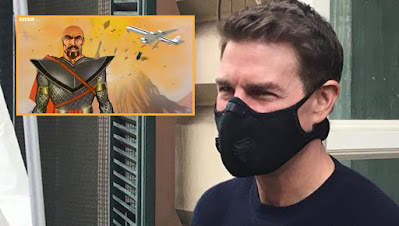 The Babylon Bee takes a satirical shot at actor Tom Cruise, who screamed at crew members who were observing COVID-19 restrictions.

LONDON—While filming the next Mission Impossible movie, an actor who believes Xenu stacked frozen aliens around volcanoes and then flew Douglas DC-8s over them to drop hydrogen bombs and blow them all to smithereens some 75,000,000 years ago shouted at his crew for not wearing masks and not listening to the science. "We must listen to the science, do you understand me!?" shouted the man who follows the idea that a space lord alien dude came to Earth, then known as Teegeeack, part of a sector called the Galactic Confederation, and blew up a bunch of his people, which transformed them into thetans. "I'm sick and tired of all the ignorant beliefs going around this set! Come on, man!"

"Alright, I'm off to go clear some clusters of thetans off my body," he said, referring to his belief that the volcanoed, bombed aliens transformed into metaphysical creatures called "thetans" and now attach themselves to humans, and then must be cleared through a process that involves meditation, introspection, and giving the Church of Scientology millions of dolllars.

‘We Must Follow The Science!’ Screams Actor Who Believes Xenu Dumped Frozen Aliens Into Volcanoes And Exploded Them With Bombs 75,000,000 Years Ago | The Babylon Bee