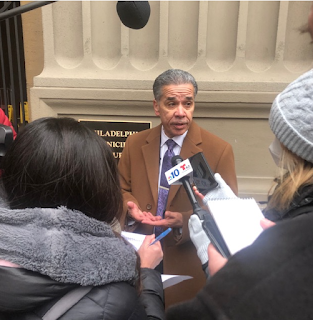 Standing in front of the District Attorney's office, Carlos Vega, a former career homicide prosecutor, announced he would run for D.A., and be an advocate for crime victims.

As a homicide prosecutor for 30 years, Vega said, "I have seen mothers and they have come to me and they say, 'Carlos, they killed my baby. They took him away.' "

Vega recalled what he used to tell those moms.

"This city deserves a district attorney who is a voice for the victims," he said. But that's not what we have in Larry Krasner, who, as D.A., has been an advocate for criminals. And the tool of the progressive elite.

"We have a district attorney now that is bought and paid for by the rich elite, the millionaire elite who have this special agenda," Vega said. "They don't even live here," he said, but they're "telling us how to run this city."

Krasner, thanks to nearly $1.7 million of billionaire George Soros's money, has been conducting "an experiment that is costing the lives of our children," Vega said. An experiment that so far this year has resulted in 471 murders, the highest total in 30 years. And more than 2,600 shootings, the highest number in the city's history.

Those staggering crime statistics, such as 471 murders so far this year, are "hard to comprehend," Vega said.

In 30 years as a homicide prosecutor, Vega said, "I prosecuted over 450 murders. Think of it. It took me 30 years to do 450 murders. And in one year alone they have wiped out our children," he said.