What The Pandemic Christmas Of 1918 Looked Like: Concerns About The Safety Of Gift Shopping, Family Gatherings And Church Services Were On Americans’ Minds Then, Too 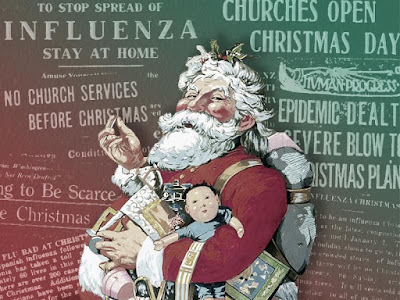 Livia Gershon at Smithsonianmag.com offers a lookback to the 1918 flu pandemic.

On December 21, 1918, the Ohio State Journal published a warning about the lingering flu pandemic from the state’s acting health commissioner: “Beware the mistletoe.” Not only should readers resist the temptation of a holiday kiss, but they shouldn’t even be at a social gathering where it might come up.

“You will show your love for dad and mother, brother, sister and the rest of ‘em best this year by sticking to your own home instead of paying annual Christmas visits, holding family reunions, and parties generally,” the commissioner said.

Christmas 1918 was not Christmas 2020. The pandemic had already peaked in the U.S. in the fall of 1918 as part of the disease’s second wave. Meanwhile, this week the deaths attributed to Covid-19 in the U.S. are the highest they’ve ever been, showing no signs of waning as the holiday approaches. But the flu also killed far more people (675,000) than Covid-19 has to date, in a country that was much smaller, population-wise, at the time. And it wasn’t over by any means. In some cities, a third wave was already starting as Christmas approached, says Kenneth C. Davis, author of More Deadly than War, a history of the pandemic and World War I aimed at young readers.

“There was an uptick, and it was a serious uptick in some,” he says.

A century ago, the federal government held much less authority and power than it does today; the CDC, for instance, wouldn’t get its start until 1946. Decisions about how seriously to take the disease fell to states and, especially, municipalities.

Davis says San Francisco took it quite seriously, implementing a strong mask mandate in the fall as well as measures that’d be described today as social distancing. After cases rose sharply in mid-October, the city locked down harshly; the measures worked to keep the flu at bay and, a month later, the city reopened and dropped the mask mandate. But the flu was not done with the city yet. Come Christmastime, Davis says, the cases were again on the rise, and residents, having finally escaped from the pandemic shutdown, were not eager to go back.

Davis said some anti-maskers of the day felt their rights were infringed on. Some Christian Scientists cited religious objections. And other people simply found masks too much trouble. It didn’t help that masks at the time were generally homemade, using several layers of cheesecloth and were supposed to be boiled for ten minutes every day to keep them clean.

While it’s hard to tease out whether Christmas gatherings or shopping contributed, influenza case numbers did indeed rise again in San Francisco in early January.

Lendol Calder, a historian at Augustana College in Illinois and author of Financing the American Dream: A Cultural History of Consumer Credit, says it wasn’t just the debate over masks that seems familiar today. In some places, residents complained that officials shut down churches but left saloons open. The closing of churches was a major issue in Milwaukee, a city that took the pandemic especially seriously—and that was also home to deeply observant German and Norwegian immigrant communities.

“To have churches closed during the Advent-Christmas season was huge,” Calder says. “That was people’s social media, to go to church.”

But, Calder adds, even Milwaukee allowed churches to hold services on Christmas Day.