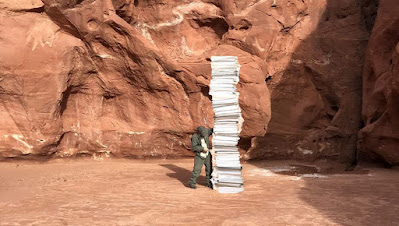 UTAH DESERT—Scientists and conspiracy theorists are baffled after a strange monolith-shaped stack of missing Trump votes was discovered without explanation in the middle of the Utah desert.

"RIGGED ELECTION!" tweeted Donald Trump after seeing the news on his Twitter feed. "They found my missing votes! There must be 10 million in that stack alone!"

Scientists insist Trump's allegations are "baseless" and that the strange stack of mail-in votes for Trump is more likely the result of an artist's work or perhaps an alien visitor.

You can read the rest of the piece and other humor piece via the below link: