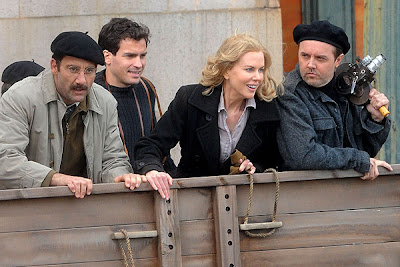 Alex Suskind at the Huffington Post reports on Clive Owens speaking about his role as the late great writer Ernest Hemingway.
*
Below is part of the Q & A:
*
So you are about to play Ernest Hemingwawy in HBO's "Hemingway and Gellhorn." Besides slugging whiskey and shooting bears, what sort of preparation did you do for the film?
*
A lot, actually. I took months out and traveled a lot. I went to his house in Cuba. I went to Hemingway's Paris, Hemingway's Madrid, read everything . It was an amazing project. It was a wonderful script. Philip Kaufman is such a great director. And obviously [acting] with Nicole Kidman -- it was one of those rare [movies] that felt like a real gift.
*
How familiar were you with Hemingway beforehand?
*
Not wildly familiar. That's why I took six, seven months out and sort of read everything. One of the perks of being an actor is you get to travel on these journeys and find out things. Doing that film made me read everything Hemingway [has done], which was great. I loved it.
*
You can read the rest of the piece via the below link:
*
http://www.huffingtonpost.com/2012/03/29/clive-owen-children-of-men-hemingway_n_1388521.html
*
You can also read an earlier post on Hemingway and Gelhorn and other films on Hemingway via the below link:
*
http://pauldavisoncrime.blogspot.com/2010/06/hbo-to-make-movie-of-ernest-hemingway.html
Posted by Paul Davis at 7:29 AM