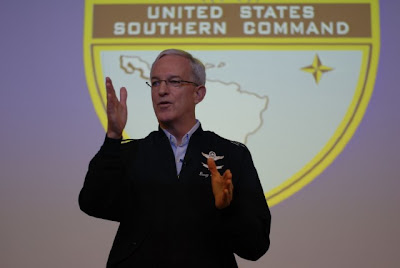 At a Defense Writers Group breakfast, Air Force Gen. Douglas M. Fraser said that in line with the president's strategy targeting transnational organized crime, Southcom works with other U.S. government agencies and international partners' military and law enforcement agencies to track, capture and prosecute people who have made several countries in the Americas the most violent in the world.

Success in that effort rests on the command's other primary mission of building international and interagency partnership and cooperation, the general told reporters.

Southcom is "only one part of the solution" to transnational organized crime and its effects in Central and South America, Fraser noted. Both the United States and the international community are intent on the issue, he added.

"We're working to pull together all the various agencies, capabilities, and [the] international community to improve our ability to coordinate and focus our efforts to address this larger problem," he said.

While transnational organized crime is not a traditional military threat, Fraser said, the violence and corruption stemming from the global drug trade in countries south of the United States has, in many cases, destroyed law enforcement and judicial processes.

Fraser said he doesn't see either an internal or external conventional military threat in the region, but many countries are using their militaries to augment too-small or corrupt police forces.

Those three countries do use their military forces in crime-fighting efforts, Fraser said. He noted Honduras has committed half of its forces to the effort, and Guatemala has employed forces in 60-day sieges against high-crime areas.

While he doesn't think military forces should serve in law enforcement over the long term, the general said, he supports the approach as a bridging strategy.

"[Southcom's] efforts along those lines are to help support the militaries with training, with some equipping -- to help them work with law enforcement as well as address the traffic as it enters Central America," he added.

Fraser said Southcom's forces pursue a more conventional military mission along the region's coastlines, where for 20 years they have spotted and monitored air- and sea-based drug movement from northern South America through the Caribbean to various destinations -- most commonly, now, in Central America.

Drug traffic -- mostly cocaine but increasingly including methamphetamine precursors coming from India and China, routed through the Americas by transnational criminal networks -- then typically moves inland, by ground or air, through Mexico and into the United States, still the world's largest consumer of illegal drugs, the general said.

"Brazil has become the second-largest user of cocaine in the world," he noted, adding drug movement is also increasing from South America to West Africa, then into Europe and the Middle East.

Southcom still conducts training and disaster-preparedness exercises and other traditional military-to-military engagements with partner forces in the region, Fraser said, but international and U.S. efforts are mostly aimed at disrupting drug trade.

Operation Martillo, or "Hammer," is focused on air and maritime surveillance of the Caribbean and eastern Pacific using Southcom assets including Navy and Coast Guard ships and Navy, Air Force and U.S. Customs and Border Protection aircraft, Fraser noted.

The general said Southcom and its regional partners interdict some 25 to 35 percent of the drug supply they know about, but he acknowledged the overall actual percentage likely is lower. And as traffickers shift from larger shipments to using smaller, more numerous boats, he said, more drugs are getting through.

Operation Hammer has in 45 days netted 3.5 metric tons of cocaine and 10 smuggling vessels, but the effort's overall aim is to use persistent surveillance to force traffickers to move their shipping routes into international waters, the general said.

That shift would prolong transit time and offer more opportunities for U.S. and other nations' vessels to stop illegal shipments, seize cargoes and prosecute traffickers, Fraser explained. Dutch and French ships are active in counterdrug efforts in the Caribbean, he added.

The general said while Southcom may see the number of its own ships decline over time as the Navy reshapes its fleet, some countries in the region are bringing more to bear in the counterdrug effort.

Colombia's recent strategy against the narcoterrorist group FARC -- Fuerzas Armadas Revolucionarios de Colombia, or Revolutionary Armed Forces of Colombia -- demonstrates what is possible, Fraser said. Colombia has focused more task forces against the group, and paired with forces in neighboring Venezuela to target illicit activity across the border.

"FARC has been diminished in half, ... and they've reverted back to very traditional guerilla tactics," he noted.

Southcom supports Colombia's efforts, and the United States has spent some $8 billion on counterdrug efforts in that nation over 10 years, Fraser said, but Colombia itself has invested $100 billion in defense during that time. Colombia can serve as a model for other regional nations, particularly in its whole-of-government approach anti-corruption efforts, the general said. The government first moves in security forces to stop drug production and quell violence in a given region, then follows up with economic development experts to help build sustainable, legal means of livelihood, he explained.

Colombian troops get anti-corruption training, and spend two months at time in postings in the field before rotating to a new assignment elsewhere in the country, Fraser added. Through these means, the Colombian government has gained control over the country's cities and large towns, he said.

Other nations in the region can take those lessons and determine how to apply them to their situation, the general said.
Posted by Paul Davis at 6:52 PM