The Dictionary of Espionage: Spyspeak Into English 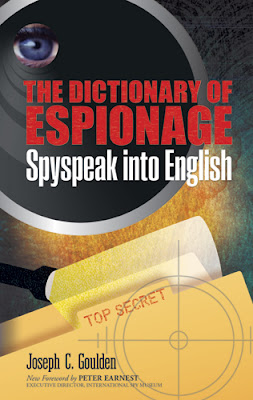 James Srodes, the author of a good book on legendary CIA director Allen Dulles, wrote a good review of Joseph C. Goulden's The Dictionary of Espionage: Spyspeak into English (Dover Publications) for the Washington Times.
In this accessibly written book, Washington author Joseph C. Goulden illuminates and defines much of the standard jargon of the intelligence community with refreshing asides about many of spying’s urban legends - many of which may or may not be true. Informed by remarkable access to the intelligence community, the book, first issued in 1986, has been significantly updated and contains a foreword by Peter Earnest, the founding executive director of the International Spy Museum in Washington and a former CIA operations officer.   ﻿
You can read the rest of the review via the below link:

Note: I recently interviewed Joseph C. Goulden for Counterterrorism magazine. The Q & A will appear in the next issue of the quarterly publication.

I previously interviewed Mr. Goulden, as well as Peter Earnest, for a piece on espionage and the International Spy Museum that appeared in Counterterrorism magazine a few years back.

http://home.comcast.net/~pauldavisoncrime/pwpimages/SpyMuseum3.jpg
Posted by Paul Davis at 7:26 AM