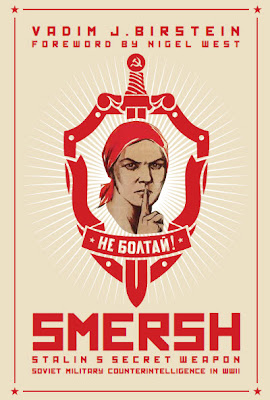 Joseph C. Goulden, an expert on espionage and intelligence matters and the author of The Death Merchant, wrote an interesting review of an interesting book on a notorious Soviet organization, SMERSH.

SMERSH is known mostly to thriller readers as the arch-nemesis to Ian Fleming's iconic James Bond character in the early thrillers.

You can read Mr. Goulden's review of Vadim J. Birstein's SMERSH in the Washington Times via the below link:

Note: Ian Fleming wrote his James Bond novels unabashedly for entertainment - his, as well as his readers. He employed his vision of an evil and murderous SMERSH in his early classic thrillers for dramatic purposes.

He often employed a mix of the factual with the fictional in his books. As a journalist and a former intelligence officer, he was able to pour facts, places and products (what he called "incidental intelligence") into the story to cement the fictional component.

For the record, Fleming was not a British Secret Intelligence Service (SIS, also known as MI6) officer during WWII, as stated in the review. Fleming was a naval intelligence officer and personal assistant to the director of Naval Intelligence. Of course, Fleming worked with SIS officers during the war.
Posted by Paul Davis at 10:03 PM