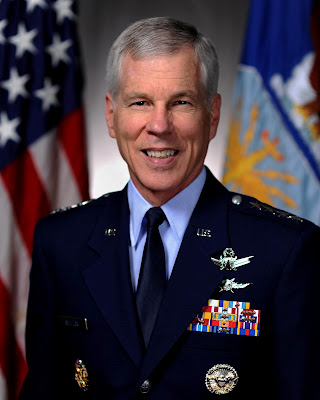 "It's hard to imagine what life was like before we had ... GPS providing very accurate targeting capability, military satellite communications providing all the reach-back that's needed, [and] missile warning providing cover for our deployed forces," Air Force Gen. William L. Shelton said.

The Air Force launched and maintains the 24 satellites that make up the GPS navigation system. The all-weather, 24-hour system was intended for military use, but in 1983 President Ronald Reagan made it freely available to civilians, for the public good, after a Korean Air Lines flight carrying 269 people was shot down for straying into Soviet airspace.

The first GPS satellite was launched in 1989, and the 24th in 1994. In 2000, Congress authorized a modernization effort called GPS-III that will improve position, navigation and timing services and add advanced anti-jam capabilities to the constellation.

"The biggest concern is that GPS's signal is a very weak [one]," Shelton said. "It's a spread-spectrum signal, and it is not difficult to jam. ... In fact, you can buy [a GPS jammer] online, and we're starting to see even criminal elements use GPS jamming to cover their tracks. The game afoot here is to continue to drive a no-kidding adversary to higher powers of their jammers. Once you get to a significant power level, those are called targets."

The Air Force is cranking up power on the satellites to force adversaries to use higher-power jammers that can then be found and targeted, Shelton said.

"One of the design features of GPS-III is higher power," Shelton said, "and we also can do some things with antenna technology and the way we operate our platforms to protect ourselves from jamming."

For the Air Force satellite effort, space launch -- getting satellites from Earth to orbit -- is truly foundational, Shelton said. In 2011, the Defense Department and intelligence community succeeded in all 49 attempts to launch evolved expendable launch vehicles, or EELVs, that carried satellites into orbit.

The Air Force EELV program, replacing the existing launch fleet with two families of vehicles that use common components and infrastructure, seeks to make space launch more reliable and affordable, the general explained.

United Launch Alliance, which Shelton called "the only supplier of the full gamut of launch capabilities," now handles space launches for the Defense Department, NASA, and the intelligence community -- including the National Reconnaissance Office, the government agency that designs, builds, launches and maintains U.S. intelligence satellites.

ULA, formed in 2006, is a joint venture by Lockheed Martin and the Boeing Co. that uses Atlas V and Delta II and Delta IV launch vehicles to support strategic U.S. space initiatives.

"We are very proud of our success record in the launch business, unprecedented in the history of space flight, ... but at the same time, with costs spiraling like they are, we have to take action to reduce the cost," Shelton said.

One action, he said, is to ask ULA to come in with priced options for booster cores, or rocket stages, over three to five years. "Somewhere in there," the general added, "we believe there will be a sweet spot for us."

The other action, Shelton said, is to use commercial services whenever possible, citing military use of wideband communications as an example.

But the services must be assured of worldwide capability, the general said.

"If you tell me where I'm going to fight, it's easy," Shelton said. "But if I have to protect the capability to fight anywhere, any time, can I do it commercially, or do I have to have a dedicated military capability to do that? Those are all the kinds of things we are exploring with the commercial community."

Using commercial space launch services for national security satellite launches is not an option today, he said, because the capability doesn't yet exist in the commercial world.

Orbital, based in Virginia, has delivered or had under contract 1,000 satellites, launch vehicles and other space-related systems since 1982. The company says it provides full-service engineering, production and technical services for NASA, DOD and commercial and academic space programs, and is supplying commercial cargo resupply services for the International Space Station.

SpaceX, established in 2002, reports that it has developed two new launch vehicles; has a manifest for light, medium and heavy-lift space launches into 2017; and has received commercial off-the-shelf funding from NASA to demonstrate delivery and return of cargo to the space station.

Shelton said the Air Force distributed a step-by-step guide to certification for national security launches in October. Commercial companies, he said, "just need to give us adequate insight to [their history of] commercial missions so we can assure ourselves that no corners were cut, that we understand their process, the reliability of the components [and] their capabilities."

"Once they've proven that with a number of missions," he added, "they'll be ready to go."
Posted by Paul Davis at 1:18 AM