But We Got him First: The Bin Laden Plot to Kill President Obama And General Petraeus 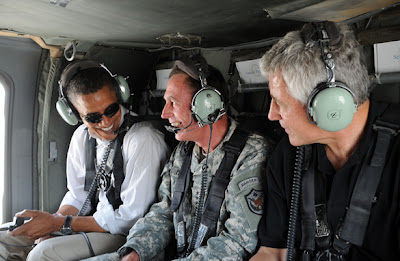 David Ignatius, a columnist for the Washington Post, reports on the Osama bin Laden plot to assissinate President Obama and General David Petraeus.

Before his death, Osama bin Laden boldly commanded his network to organize special cells in Afghanistan and Pakistan to attack the aircraft of President Obama and Gen. David H. Petraeus.

“The reason for concentrating on them,” the al-Qaeda leader explained to his top lieutenant, “is that Obama is the head of infidelity and killing him automatically will make [Vice President] Biden take over the presidency. . . . Biden is totally unprepared for that post, which will lead the U.S. into a crisis. As for Petraeus, he is the man of the hour . . . and killing him would alter the war’s path” in Afghanistan.

Administration officials said Friday that the Obama-Petraeus plot was never a serious threat.

The scheme is described in one of the documents taken from bin Laden’s compound by U.S. forces on May 2, the night he was killed. I was given an exclusive look at some of these remarkable documents by a senior administration official. They have been declassified and will be available soon to the public in their original Arabic texts and translations.

Note: David Ignatius is also a fine spy thriller writer. You can read my review of one of his thrillers, The Increment, via the below link:

http://pauldavisoncrime.blogspot.com/2009/07/iranian-intrigue-in-increment.html
Posted by Paul Davis at 10:55 AM