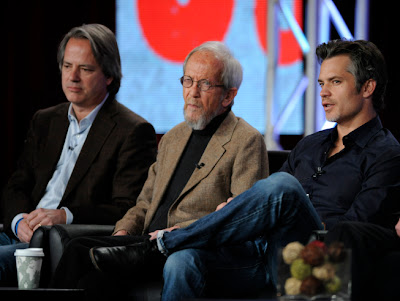 Neal Rubin's column at the Detroit News offers the news that fans of crime writer Elmore Leonard's character U.S. deputy marshal Raylan Givens will see much more of him in the future.

Justified, the FX series based on an Elmore Leonard novella, was renewed this week for a fourth season. That's a good thing on several levels, Leonard says, starting with the fact that he just plain likes the character, federal marshal Raylan Givens.

Leonard, 86, appreciates Givens so much that he'll star again in his next novel, which is called Blue Dreams and was 15 pages along as of Wednesday. That's after appearing in the novella "Fire in the Hole," plus several earlier books and Leonard's current bestseller, Raylan: A Novel (William Morrow, $26.99).

The above photo show Elmore Leonard in the center between Justified producer Graham Yost and actor Timothy Olyphant.
Posted by Paul Davis at 9:53 PM