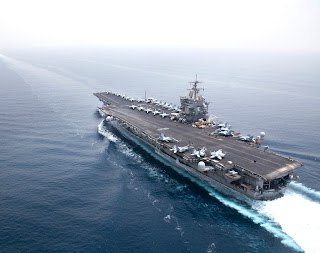 Brock Vergakis at the Associated Press wrote a piece that appeared in the Philadelphia Inquirer on the final cruise of the USS Enterprise.

NORFOLK, Va. - When the makers of "Top Gun" were filming on board the USS Enterprise, they donated a set of black fuzzy dice to liven up the ship's otherwise drab interior.

A quarter-century later, the dice will still be dangling inside the tower of "the Big E" as the world's first nuclear-powered aircraft carrier sets sail on its final voyage Sunday.

The trinket is a reminder of the ship's storied 50-year history that includes action in several wars, a prominent role in the Cuban missile crisis and serving as a spotter ship for John Glenn's historic orbit of the earth.

"To serve on this ship, certainly in this capacity, you certainly have to be a student of the ship's history," said Rear Adm. Walter Carter, commander of the Enterprise strike group. "Fifty years of service, in our nation's history, we've never had a warship in service that long."

You can visit the aircraft carrier's web site via the below link:

www.enterprise.navy.mil
Posted by Paul Davis at 4:34 AM