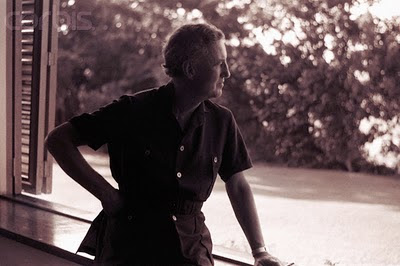 Vintage Publishing has acquired the ten year license to publish Ian Fleming's 14 James Bond books, including his classic thrillers  Goldfinger, From Russia With Love, On Her Majesty's Secret Service and Dr No.

As Vintage publishing noted in their press release, Fleming's novels have gone on to sell more than 100 million copies worldwide and have been the inspiration behind the world's longest-running film franchise.

You can read Vintage Publishing's press release below:

Vintage Books is the sister imprint of Jonathan Cape, who were the original publishers of Ian Fleming’s Bond fiction and published Casino Royale, the first in the series of fourteen Bond books in 1953. The novels have now gone on to sell over 100 million copies worldwide and have been the inspiration behind the world’s longest-running film franchise.
Jonathan Cape was also the publisher of the first ever official Bond novel written following Fleming’s death in 1964. Kingsley Amis took up the mantle in 1968 writing Colonel Sun as Robert Markham.

Bond novels have since been written by John Gardner, Raymond Benson, Sebastian Faulks and Jeffery Deaver.
Corinne Turner, Managing Director of Ian Fleming Publications Ltd comments: ‘We are delighted to be reuniting James Bond with his original publisher. This new deal, incorporating both print and ebook formats, represents a significant step-change for Ian Fleming and his work.’
Richard Cable, Managing Director, Vintage Publishing, acquired exclusive rights to the Bond novels in the English language worldwide exc USA/Canada. Cable commented: ‘Bond, James Bond. Ian Fleming’s famous Secret Service agent 007 remains one of the most iconic of all literary creations, and continues to thrill new and existing readers alike. We are excited to welcome Ian Fleming’s books to the Vintage list for the first time and to reunite him with Jonathan Cape, the original publisher of his work. We are hugely looking forward to working with IFPL to relaunch the list in 2012, a year which marks the 50th anniversary of the first James Bond film, Dr No, and sees a new 007 adventure hit the big screen.’
Vintage Publishing Sales Director Tom Drake-Lee, a lifelong fan of the Bond novels, will head up the publishing team across all publications as Ian Fleming Brand Manager. Two series styles will be created for the fourteen books: one under the Vintage paperback imprint and one in Vintage Classics.
This is the first time that an author’s entire fiction backlist has been published under both imprints.
The publishing programme will be underpinned by consumer insight to bring a new generation of readers to Ian Fleming’s work and engage people who have recently discovered the Bond brand through the films and computer games.
Jonny Geller, Managing Director, Curtis Brown comments: ‘2012 is the year of Bond - a new movie and a new home for Ian Fleming’s backlist. James Bond never sleeps and we promise an exciting programme of innovative publishing ventures aimed at the next generation of readers for Ian Fleming’s greatest creation.’ Random House will take over from Penguin as publishers of the James Bond novels in April and will publish the Bond backlist in ebook and print format in summer 2012.
Posted by Paul Davis at 4:57 AM