A Look Back At A Young Writer Named Hemingway: Ernest Hemingway In Toronto 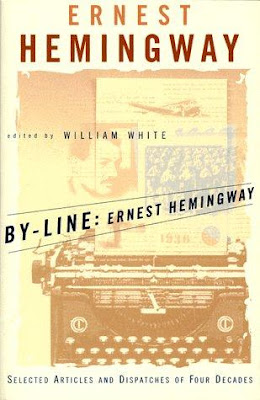 ﻿
Graeme Bayliss at the Torontoist offers a piece on how a certain young writer named Hemingway got his start in Toronto.

Ernest Hemingway is the most prominent writer ever to have called Toronto home, however reluctant he was to recognize the city as such. He didn't achieve fame until the 1926 publication of  The Sun Also Rises, two years after he quit his post at the Toronto Daily Star and moved to Paris. Nevertheless, his life in Toronto and the journalistic work he produced here offer an interesting - if unflattering - glimpse of postwar Toronto in all its sanctimonious frigidity. Not only that, but Hemingway's dispatches for the Star make evident the evolution of the writer's signature terse, bold prose.

The above photo is of the book cover By-Line Hemingway, which offers some of Hemingway's pieces for the Toronto Star.

Note: You can also read an earlier post on a book of Hemingway's Paris dispatches for the Toronto Star via the below link:

http://pauldavisoncrime.blogspot.com/2010/09/hemingway-on-paris-ernest-hemingways.html
Posted by Paul Davis at 1:47 AM