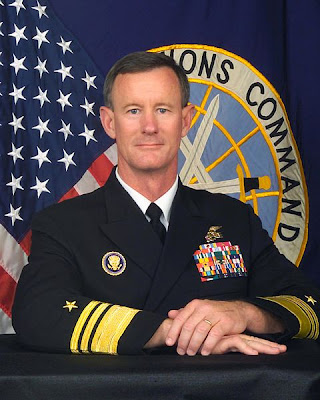 ASPEN, Colo., July 26, 2012 - The nation expects special operations forces to be successful every time they are called upon, but they're not wholly about combat, the commander of U.S. Special Operations Command said here yesterday during a discussion moderated by CNN's Wolf Blitzer at the Aspen Institute's annual security forum.

"We get a lot of notoriety for the raids, for the rescue operations, and frankly we're very proud of that," Navy Adm. William H. McRaven said. "But the fact of the matter is that's a small portion of what we do."

The discussion, titled "At the Point of the Spear: The Role of Special Operations Forces in America's Post-9/11, Post-Iraq/Afghanistan Defense Strategy," opened the annual three-day forum. Topics ranged from the raid that killed Osama bin Laden to what made McRaven decide to become a Navy SEAL.

McRaven said special operations forces are deployed to 79 countries, and the majority of those deployments are for partner capacity-building, not for combat missions.

"We're trying to teach other nations how to deal with their own problems so they don't grow violent extremists," he said. "We're building wells in places. We're doing civil affairs operations. ... There is a whole spectrum of things that special operations do that rarely get the press's attention because it's not 'sexy.'"

Some nations have not followed the extremist route because special operations forces have been working there for decades, McRaven said.

The admiral also presented his views on a variety of topics that came up during the wide-ranging discussion:

-- Pulling together defense and civilian agencies to make the bin Laden raid happen was easy, he said, because the interagency team has been built steadily over the last decade. "I've got to tell you, today it hums," he added.

-- "At the end of the day, all we care about is whether you carry your rucksack and you do your job," he said when the discussion turned to gays in the military.

-- On the Arab Spring: "What I know is democracy is hard," he said. "I've watched it as we've tried to build democracies in Iraq and Afghanistan. ... It took us a long time as a nation to build a strong democracy, and it will probably take them some time."

-- On Afghanistan's forces: "When you spend time with the guys that we spend time with, you realize they are just as patriotic, just as committed, just as tough, just as courageous as the American soldier that's partnered with them," McRaven said. "For the folks that we work with, I don't think trust has ever been an issue."

-- Women have proven to be up to the task of serving in the nation's special operations forces, the admiral said. "We have a lot of females who serve in special operations," he noted. "They do a fantastic job across the board. ... We couldn't do the job without them."

-- McRaven credited a Green Beret soldier with helping him decide to become a SEAL. "This young Army captain came to meet my sister for a date," he said. "My sister, as usual, was late, so I had an opportunity to talk to him for a little while. ... He said, 'If you're going to go in the Navy, you ought to be a Navy SEAL.'"
Posted by Paul Davis at 3:26 AM