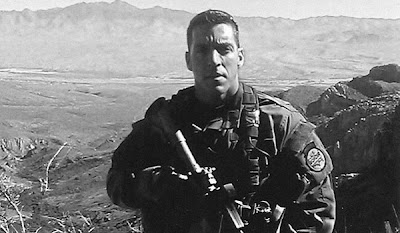 The U.S. Justice Department released the below information today:
*
An indictment charging five individuals involved in the death of U.S. Border Patrol Agent Brian Terry (seen in the above photo) was unsealed today in Tucson, and a reward of up to $1 million from the FBI for information leading to the arrest of four fugitives, was announced by Department of Justice officials.
*
According to the indictment, Manuel Osorio-Arellanes, Jesus Rosario Favela-Astorga, Ivan Soto-Barraza, Heraclio Osorio-Arellanes and Lionel Portillo-Meza are charged with crimes including first degree murder, second degree murder, conspiracy to interfere with commerce by robbery, attempted interference with commerce by robbery, use and carrying a firearm during a crime of violence, assault on a federal officer and possession of a firearm by a prohibited person. A sixth defendant, Rito Osorio-Arellanes, is charged only with conspiracy to interfere with commerce by robbery.
*
The 11-count third superseding indictment, which was handed up by a federal grand jury in the District of Arizona on Nov. 7, 2011, alleges that on Dec. 14, 2010, five of the defendants (Manuel Osorio-Arellanes, Jesus Rosario Favela-Astorga, Ivan Soto-Barraza, Heraclio Osorio-Arellanes and Lionel Portillo-Meza) engaged in a firefight with Border Patrol agents. During the exchange of gunfire, Agent Terry was shot and killed. The indictment alleges that the defendants had illegally entered the United States from Mexico for the purpose of robbing drug traffickers of their contraband. In addition to the murder of Agent Terry, the indictment also alleges that the five defendants assaulted Border Patrol Agents William Castano, Gabriel Fragoza and Timothy Keller, who were with Agent Terry during the firefight.
*
Agent Terry served his country honorably and made the ultimate sacrifice in trying to protect it from harm, and we will stop at nothing to bring those responsible for his murder to justice,” said Attorney General Eric Holder. “This investigation has previously resulted in one defendant being charged with Agent Terry’s murder and taken into custody, and today’s announcement reflects the department’s unrelenting commitment to finding and arresting the other individuals responsible for this horrific tragedy so that Agent Terry’s family, friends and fellow law enforcement agents receive the justice they deserve.”
*
U.S. Attorney for the Southern District of California Laura E. Duffy said, “Agent Terry died in the line of duty while protecting his country. But he was more than a federal agent – he was a son, a brother, a co-worker and a friend to many. The indictment unsealed today reflects the progress our dedicated law enforcement team has made piecing together this complex murder case. But there is more work to be done and we will not rest until we bring justice to the family of Brian Terry.”
*
“U.S. Border Patrol Agent Brian Terry made the ultimate sacrifice in December of 2010, while protecting our border,” stated James L. Turgal Jr., FBI Special Agent in Charge, Phoenix Division. “Today’s announcement is an important step forward in the pursuit of justice for Border Patrol Agent Terry and his family. It is our hope that the publicity surrounding this case will lead to information concerning the whereabouts of the remaining four fugitives. The FBI and our law enforcement partners will continue to pursue those individuals responsible for the murder of Border Patrol Agent Brian Terry.”
*
Manuel Osorio-Arellanes has been in custody since his arrest the night of the shooting. Rito Osorio-Arellanes has been in custody since Dec. 12, 2010, when he was arrested by Border Patrol agents on immigration charges. The indictment is being unsealed today in order to seek the public’s assistance in locating the fugitive defendants.
*
This case is being prosecuted in federal court in Tucson by attorneys from the Southern District of California, Special Attorneys Todd W. Robinson, David D. Leshner, and Fred A. Sheppard. The U.S. Attorney’s Office for the District of Arizona is recused. This case is being investigated by the FBI.
*
An indictment is a formal charging document and defendants are presumed innocent until the government meets its burden in court of proving guilt beyond a reasonable doubt.
*
Anyone with information concerning the whereabouts of the fugitives should contact the FBI's Phoenix field office at (623) 466-1999. You may also contact your local FBI office or the nearest American Embassy or Consulate.
Posted by Paul Davis at 3:35 PM