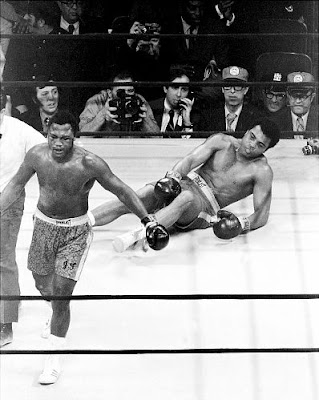 I agree with Stan Hochman, a Philadelphia Daily News columnist, who offers a dissenting voice regarding the announcement that the National Constitution Center awarded Muhammad Ali the Liberty Medal.

... the folks at the National Constitution Center either forgot, or never heard Ali turn the weeks leading up to his first fight against Joe Frazier into a nasty monologue that reeked of racism.

Called Frazier "the white man's champ." Called him an Uncle Tom. Called him ugly, too ugly to be champion. Called him ignorant. (Years later he compared Frazier to a gorilla, rhymed it with Manila, site of their third fight. And if that ain't enough to disqualify him from the Liberty Medal, then maybe they ought to rethink the criteria.)

... Frazier never forgave Ali for that cruelty. The folks at the National Constitution Center apparently are more forgiving, more willing to rewrite history.
You can read the rest of the column via the below link:

In the above photo Muhammad Ali is on the canvas after Joe Frazier knocked him down in the 1971 fight.

Note: I was stationed on the USS Kitty Hawk as the aircraft carrier performed combat operations off the coast of Vietnam when the Ali-Frazier fight took place in 1971.

I was a gambler in those days and I took Frazier over Ali. Nearly everyone, especially the black guys, believed that Ali was going to beat Frazier. We listened to the fight over the Armed Forces Radio and I cleaned up when Frazier won.

Thank you, Joe. You were a true athlete and a gentleman. May you rest in peace.
Posted by Paul Davis at 9:31 PM