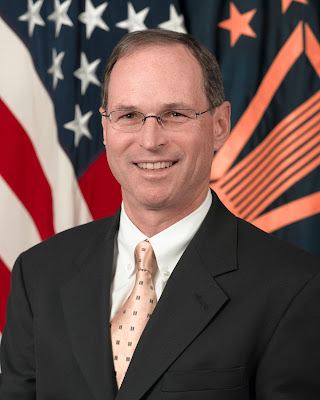 ASPEN, Colo., July 26, 2012 - Internal and external threats to the United States are legion, and the Defense Department is partnering with industry and the international community to defend against them, senior defense officials said today.

Paul N. Stockton (seen in the above photo), assistant secretary for Homeland Defense and Americas' Security, and Michael A. Sheehan, assistant secretary for Special Operations and Low-Intensity Conflict, described the natural and manmade threats that threaten the United States during a panel discussion at the Aspen Institute's annual security forum.

Stockton and Sheehan said that much work remains to be done to keep the U.S. safe from both terrorism and natural disasters.

"There is a problem I discussed last year that is still keeping me up at night, and that is...the risk of a long-term, large-scale outage of the electric power grid," Stockton said.

Such an outage could result from either a natural disaster, such as a geomagnetic disturbance or major earthquake, or from a targeted attack, he said.

Stockton said a major earthquake in the New Madrid Seismic Zone, which touches on five Midwestern states, "could bring down the electric grid for weeks and months."

Internal attacks, like the attempted bombing of Times Square in 2009, demonstrate that there is much to be concerned about in the nexus between domestic and foreign threats, Sheehan said.

"Our adversaries, state and non-state, are not stupid. They're clever and adaptive," Stockton said. "Rather than attacking us on the pointy end of the spear...there is a risk that they'll adopt a profoundly asymmetric strategy, reach around and attack us here at home [in] the critical infrastructure that is not owned by the Department of Defense."

Despite this, the U.S. and its international partners have made a lot of progress in their fight against al-Qaida, its various affiliates, and groups like al-Shabaab in Somalia, Sheehan said, with enormous success coming in regions like Afghanistan and Pakistan. In other regions the fight is just beginning to show progress.

"We have begun to turn the tide of al-Qaida in Yemen," Sheehan said. "That partnership is showing results on the ground. Yemen is starting to regain territory that they lost to al-Qaida, but we still have a long way to go."

Sheehan added that al-Qaida in Yemen, along with the al-Qaida threat in the Federally Administered Tribal Areas of Pakistan, remain the preeminent threat for strategic attacks against the U.S.

The Department of Defense is continually developing partnerships, both with the international community and with U.S. industries, to counter these threats, the officials said.

"We're taking care of business inside the Department of Defense...that is not enough," Stockton said. Industry needs have strong plans to ensure the continuity of operations in the event of an emergency. There also need to be voluntary, innovative partnerships between industry and the government, Stockton said.

Partnerships with industry do more than just protect business interests. They also protect the Department of Defense's ability to execute its mission, Stockton said.

"The Department of Defense depends on U.S. facilities and infrastructure in order to be able to operate abroad," he said. "To make those operations function, we depend on the electric grid and all of the other critical infrastructure that needs electrons to function."

The United States needs to take an all-hazards approach to dealing with potential threats, Stockton said, because prevention of certain events is just not possible.

"There are all kinds of threat vectors out there in addition to cyber," Stockton said. "There's only so much that can be done on the prevention side. We should do everything we can, but building resilience is also critical component of that effort."
Posted by Paul Davis at 3:35 AM