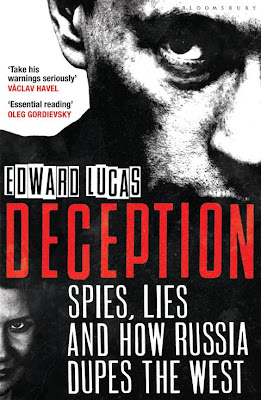 Brett Stephens at the Wall Street Journal offers a good review of Edward Lucas' Deception: Spies, Lies and How Russia Dupes the West.


Who is America's principal geopolitical foe? When Mitt Romney suggested recently that it was Russia, he was met with howls of high-minded derision. Didn't the presumptive Republican nominee know the Cold War was over? Wasn't he aware of all the benefits the U.S. had reaped thanks to the Obama administration's "reset" of relations with Moscow?

Mr. Romney's smug critics might laugh a bit less once they read "Deception," Edward Lucas's riveting follow-up to his prescient 2008 book on Russia, "The New Cold War." Mr. Lucas, a senior editor at the Economist and its former Moscow bureau chief, understands that even if the West has ceased to think of Russia as its enemy, the reverse has never really been true, especially among those who now govern from the Kremlin.

"The New Cold War" dealt mainly with how Vladimir Putin's Russia bullies its perceived enemies, using everything from pipelines to polonium poisoning. "Deception" has a narrower focus: the regime's aggressive use of its intelligence services to achieve ends that are malign and frequently criminal.