Mark Twain And The Colonel: The Two Kings Of The Gilded Age 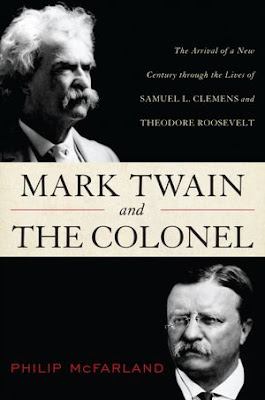 Richard Zacks at the Wall Street Journal offers an interesting review of an interesting book about two great American historical figures who didn't care much for each other, Mark Twain and Theodore Roosevelt.


Mark Twain called Theodore Roosevelt the "most popular human being that has ever existed in the United States"; he also called him "far and away the worst president we have ever had." Twain made these observations in his autobiography in 1906 but ordered them embargoed for 100 years.

Roosevelt once remarked privately to a friend that he would like to see Twain "skinned alive." He dismissed Twain's anti-imperialism as part of the "silly, mock humanitarianism of the prattlers who sit at home in peace."

Philip McFarland in "Mark Twain and the Colonel: Samuel L. Clemens, Theodore Roosevelt and the Arrival of a New Century" delights in spotlighting the secret vitriol between these two mustachioed men, who, in the first decade of the 20th century, arguably ranked as the most famous Americans on the planet.