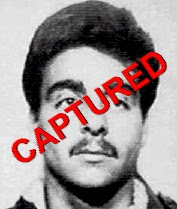 The U.S. Marshal's Service released the below information on Friday:

Washington – U.S. Marshals 15 Most Wanted fugitive Vincent Legrend Walters, age 45, has been captured in Cancun, Mexico, after nearly 24 years on the run.

“... The U.S. Marshals are thrilled with the capture of this violent fugitive,” said Steven Stafford, U.S. Marshal for the Southern District of California. “This is a prime example of the sheer determination and persistence we have when tracking down a wanted criminal.”