The Brothers Bulger: A Fitting Name For An Award For Assembly Leader? 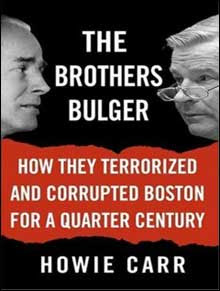 Howie Carr, a Boston Herald columnist and author of The Brothers Bulger: How They Terrorized and Corrupted Boston For a Quarter Century, wrote an interesting piece for the New York Post.

Prestigious — that’s how everybody from Gov. Cuomo on down is describing the award that Assembly Speaker Sheldon Silver will pick up next month in Chicago from the National Conference of State Legislatures.

What’s left unsaid is the name of the august honor — the William M. Bulger Excellence in State Leadership Award. And there’s a good reason for everyone’s silence — or maybe omerta is a better word.

For almost 20 years, as president of the Massachusetts state Senate, South Boston’s Billy Bulger was the most powerful politician in his state. The source of his immense clout? His brother, James “Whitey” Bulger — the most powerful gangster in the city of Boston, a cocaine-dealing FBI informant currently charged with 19 murders.

You can also read an earlier post on Howie Carr and Whitey Bulger via the below link:

http://pauldavisoncrime.blogspot.com/2011/07/whitey-bulgers-jailhouse-blues.html
Posted by Paul Davis at 3:47 AM