An Unexpected Place For Lessons To Fight Mexico's Mafia: Italy 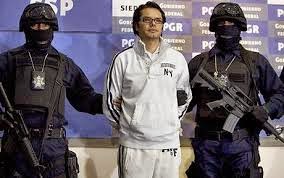 Robert Saviano, author of Gomorrah, offers his views on how to combat Mexican organized crime at Reuters.com.

At this moment, the fiercest, most powerful criminal organizations in the world are located in Mexico. Recent events should leave no one with any doubts.

On Sept. 26, 43 trainee teachers in the southwestern city of Iguala were abducted by the police and, according to the government, were most likely murdered by drug traffickers. Their deaths, which are the latest in a long list of bloody gang-related murders, sparked widespread riots in Mexico City. According to Amnesty International, 136,100 people were killed by Mexican cartels between December 2006 and May 2014 alone.

So how is Mexico to deal with this formidable problem? Perhaps it could look to Italy for lessons on how a deeply entrenched mafia.

Italy is the country with the oldest mafia in the world—indeed, the very word mafia has Italian origins. But ever since the 1980s and early 1990s, when the Italian mafia was planting bombs on highways to kill state magistrates, mafia-related homicides have nose-dived. Between 1992 and 2012, murders related to organized crime dropped around 80 percent, according to the United Nations.

According to one mafia expert, the “radical and painful” changes seen in the decline of mafia groups in southern Italy “are the best proof of the effectiveness of anti-mafia law enforcement.”

Some might counter that Mexico does not have a mafia problem. After all, the Mexican cartels are often simply referred to as “drug traffickers.”

However, the most recent report of the U.S. State Department has estimated that the amount of money laundered annually in Mexico is between $19 and $29 billion. Such data suggests that continuing to merely call them drug traffickers is neither accurate nor, indeed, responsible.

To launder that amount of money, one has to be a mafia organization. These groups do more than merely produce and sell drugs — they reinvest profits in real estate, businesses and stocks. In addition, the groups also have a pyramid structure and employ financial consultants and accountants, which is typical of mafia organizations.

To date, Mexico has primarily used military crackdowns to fight its mafia. This has not resolved the situation, and, in some cases, has even worsened it by leading to a significant increase in ferocity and defections.

http://blogs.reuters.com/great-debate/2014/12/04/an-unexpected-place-for-lessons-to-fight-mexicos-mafia-italy/
Posted by Paul Davis at 2:48 AM