My Name Is Drake, John Drake: A Review Of Patrick McGoohan's Secret Agent AKA Danger Man 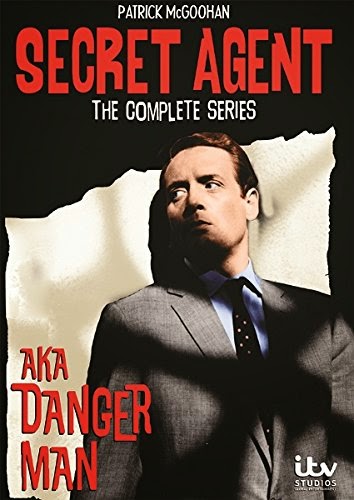 Kyle Mills at dvdtalk.com offers a review of the Secret Agent AKA Danger Man: The Complete Series DVD.

"Every government has it's secret service branch. America, the CIA; France, Deuxieme Bureau; England, MI5; Even NATO has it's own. A messy job? Well that's when they usually call on me or someone like me. Oh yes, my name is Drake. John Drake." Starring Patrick McGoohan from the fan favorite series, The Prisoner, in the titular role of John Drake, comes Secret Agent AKA Danger Man: The Complete Series, a less edgy, James Bond/Roger Moore-esque take on the spy genre.

For those who don't know much about this series, I will give you a brief backstory. Before Patrick McGoohan assumed his most identified role as Number Six in the groundbreaking series, The Prisoner, a role that many fans assume is a continuation of this series, he starred on a British television as a secret agent named John Drake in Danger Man (also known as Secret Agent, the title that it was broadcast under in North America).

The first installment ran in half-hour installments on British television from 1960 through 1962 before McGoohan tired of the role after 39 episodes. Eventually 2 years later, the show was brought back in an hour long format clearly to cash in on the success of the cinematic adventures of James Bond, in 1964 and it ran until 1966, until McGoohan once again wanted to leave the role.

This was assumed to be the end of John Drake's escapades, but McGoohan decided to return once more which only lasted for two episodes in 1968. This is the last we'd see of Drake and his espionage tales. After several releases over the years, After A&E had released the series multiple times, Timeless Video once again brings together the entire anthology of Secret Agent: AKA Danger Man to offer it in one deluxe, compact, slick looking box set. Secret Agent: Danger Man revolves around the espionage exploits of Bond, James Bond Drake, John Drake. A smooth talking, charismatic agent that would rather talk you down than force you to cooperate, never carrying a gun but relying on his quick wit and brain to resolve intense situations. But don't let that deter you, this is an action show, fists fly and people do get shot, and for a show nearly 55 years old, it all looks great.

Each of these 86 episodes, it follows the exact same formula; John Drake is assigned a mission, he goes to some beautiful/exotic locale, follows the target, plot twist! and he wraps it up nice and neat. We follow the exact same formula through these 86 adventures, and while most shows would get tedious after doing the same thing that long, Secret Agent somehow kept it fresh thanks to it's great locales, phenomenal production designs, tight writing and of course it's star.

You can also watch the opening of Secret Agent via the below link:

I was also a huge fan of Patrick McGoohan's brilliant and surreal 1960s TV series The Prisoner and his previous 1960s TV series, the clever, intelligent and realistic Danger Man (called Secret Agent in the U.S).

I bought the complete series a while back and over the course of many months I watched every episode. Good stuff.
Posted by Paul Davis at 3:21 PM