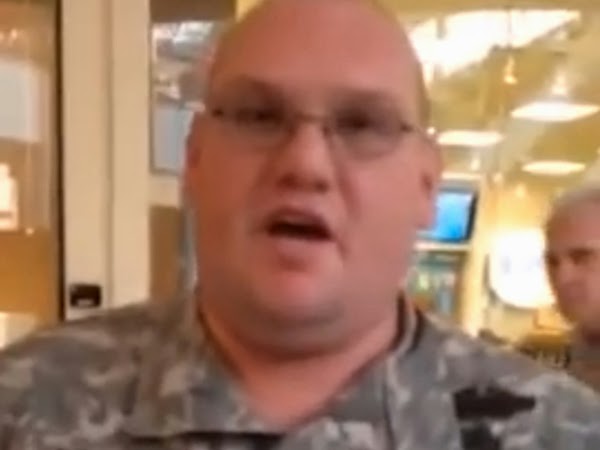 Have you seen this man?

Sam Wood at Philly .com reports that the man was wearing the uniform of a U.S. soldier at a mall and was raking in the respect and pride of a grateful nation, as well as taking advantage of store discounts for military people, but a sharp Army veteran named Ryan Berk called him out and captured the encounter on video.

A trip to the Oxford Valley Mall turned into a National Day of Shaming for a shopper dressed in camouflage fatigues on Black Friday.

But today, the shame turned an even darker shade for the shopper who now is being accused of falsely posing as a U.S. Army Ranger in order to obtain special military discounts at mall stores.

On Monday, U.S. Rep. Mike Fitzpatrick (R-Bucks) asked the U.S. Attorney in Philadelphia to determine if there was evidence of a federal crime, according to the Bucks County Courier Times.

The man’s nightmare began Friday and was captured on a video later posted to YouTube, where it has been viewed nearly 1.5 million times. He had just stepped out of a shoe store when he was approached by a real highly-decorated veteran.

Something about the man’s uniform didn’t look right to Ryan Berk, a recipient of the Purple Heart who served in Afghanistan as a member of the 101st Airborne Division.

Berk stopped the pudgy uniformed man on the pretext of introducing him to his young son. Berk pulled out his cell phone and hit “record.”

The man, who wore a name ribbon identifying himself as “Yetman,” was happy to meet the boy – at first. He did not remain in good humor for long.

Berk peppered Yetman with questions. The man claimed to be a U.S. Army Ranger, one of America’s elite fighting soldiers, and said he had served in Afghanistan and Iraq.