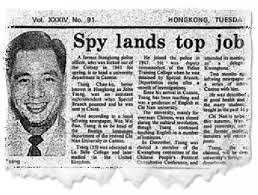 Lai Ying-kit at the South China Morning Post offers a piece on the death of a man known as "Hong Kong's First Spy."

John Tsang Chao-ko, a former Hong Kong police assistant superintendent before being expelled on suspicion of spying for China during the cold war, has died in Guangzhou, according to media reports.

Dubbed "Hong Kong's first spy", Tsang was the highest-ranking ethnic Chinese officer within the colonial Hong Kong police force until his deportation in 1961 following accusations of espionage.
Describing him as a "comrade", the state-run Guangzhou Daily reported last week that Tsang died in Guangzhou on December 18 due to "illness". He was aged 91. The report did not specify the illness Tsang suffered.

Mystery still surrounds Tsang's alleged spying activities. His deportation took place without a trial in Hong Kong and the mainland has not confirmed or denied the spying allegations.