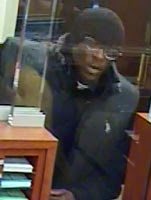 The FBI released the below photos and information regarding a suspected serial bank robber in the Philadelphia area on December 29th.

The latest incident occurred at approximately 10:35 this morning at the Wells Fargo Bank branch located at 1200 East Lancaster Avenue in Bryn Mawr, Pennsylvania.

The same subject is believed also to be responsible for the following robberies:
On each occasion, the subject entered the bank and handed a teller a threatening demand note. After obtaining cash, the subject fled the area of the bank on foot. There have been no physical injuries as a result of any of these robberies, and no weapons have been displayed or used.

The subject is described as a black male in his 30s, approximately 5’10” tall, medium build, medium complexion, with eyeglasses. In one of the robberies, the subject was not wearing the glasses. This subject is considered armed and dangerous. Anyone with information about these robberies or this subject is urged to call the FBI at 215-418-4000 or the Philadelphia Police Department. There may be a reward for information leading to this subject’s capture; tipsters can remain anonymous.
Posted by Paul Davis at 7:54 AM