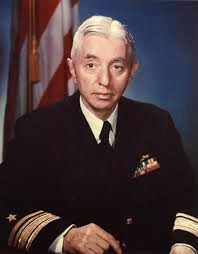 I interviewed John Lehman, the former Secretary of the Navy under President Ronald Reagan, yesterday and he told me that PBS aired a profile of Hyman G. Rickover this week.

Rickover was the Navy admiral who oversaw the development and expansion of the nuclear-powered navy.

Combative, provocative and searingly blunt, Admiral Hyman G. Rickover was a flamboyant maverick, a unique American hero. Unafraid to buck the system, he alienated Navy brass, yet inspired the men under him.

When few thought it possible, then-Captain Rickover undertook a quest to harness the fearsome power of the atom to drive the first nuclear-powered submarine, the USS Nautilus, whose trip under the polar ice pack was one of the great adventure stories of the 1950s. Later, Rickover built the world’s first commercial nuclear power plant at Shippingport, Pennsylvania. Rickover’s achievements made him into a national celebrity; he appeared on the cover of Time magazine.

You can read the rest of the piece and watch the PBS special via the below link: