Agents, Investigators Search Underground, Across the Country, And Around The World for FBI Ten Most Wanted Fugitive 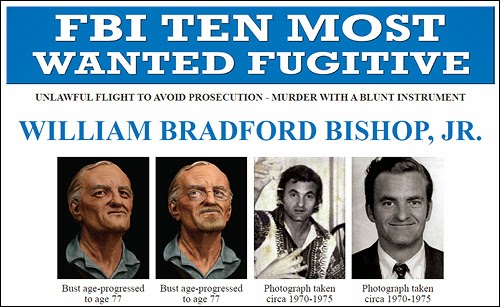 The hunt for William Bradford Bishop, Jr. has taken investigators all over the country and the world, leading to the unearthing of a John Doe, fingerprinting dozens of lookalikes, and capturing another fugitive who had been on the run for four decades.

The FBI Lab at Quantico identified Bishop’s DNA from a cigarette butt found in the family station wagon in 1976. His profile is being compared to John Does and criminals in law enforcement databases around the world. Investigators also learned from witnesses who came forward in the past year that Bishop engaged in multiple extramarital affairs with women, a fact not previously known.

The FBI named Bishop to the Ten Most Wanted Fugitives list one year ago on April 10, 2014. He is wanted for allegedly bludgeoning to death his wife Annette, mother Lobelia, and three sons—William Bradford III (14), Brenton (10) and Geoffrey (5)—at their home in Bethesda, Maryland on March 1, 1976.

Investigators believe Bishop then drove to rural North Carolina, buried the bodies in a shallow grave, and lit them on fire. The United States Attorney’s Office in Maryland has charged Bishop with unlawful flight to avoid prosecution in the murders.

Baltimore FBI, Montgomery County Police, the Montgomery County Sheriff’s Office, and the Department of State have received and followed up on more than 480 leads in the last year. They have checked lookalike reports in grocery stores, neighborhood bars, truck stops, and even a bridge club.

A tipster reported that a loner living in Mexico, who looked like Bishop, went missing days after news broke of Bishop being added to the Ten Most Wanted. The loner turned up dead off the coast. The FBI in Mexico collected DNA from the body and sent it to the Lab. It turned out not to be Bishop. Another promising lead came in immediately after CNN aired “The Hunt with John Walsh: Family Annihilator” in July 2014.

The FBI Birmingham Division Evidence Response Team exhumed the body of a John Doe, killed in a car accident in 1981. The FBI Lab again tested the remains, but it was not Bishop. In December 2014, investigators received information that a man believed to look like Bishop was living in another part of Mexico. FBI agents and Mexican authorities questioned the man and his wife, but they were not cooperative. The next day investigators discovered he was 81-year-old fugitive Robert Anton Woodring, wanted in South Florida for failing to surrender to serve a sentence for mail fraud in the 1970’s. Other tips have come in from the Philippines, Thailand, Italy, and Africa.

“The incredible amount of information we’ve received from the public has been great for this investigation. We have learned new details about Bishop from people who knew him and came forward when we put him on the Ten Most Wanted,” said Steve Vogt, Special Agent in Charge of the FBI Baltimore Division. “We can’t stress enough that the calls and e-mails from the public will eventually lead us to finding Bishop and solving this tragic case. We need people to keep giving us those tips.”

“As always, the public has been a great partner and provided tremendous information that has assisted the investigators in the search for Bishop,” said Montgomery County Sheriff Darren M. Popkin. “Every lead continues to be thoroughly investigated as you never know when that one phone call will lead us to Bishop’s capture. We encourage the public by way of phone or e-mail to keep those tips coming.”

Bishop is a white man, 6’1” tall and 180 pounds with brown hair and brown eyes when he was last seen in 1976. He has a six-inch vertical surgical scar on his lower back that would still be visible. If you have any information about Bishop, you are asked to call 1-800-CALL-FBI. You could receive a reward of up to $100,000 for information leading to his arrest.

Visit www.fbi.gov/williambradfordbishop to see more detailed information about the Bishop case, study the age-progressed photos in-depth, and view his dental records and other important images that may help you identify Bishop. You can also leave any tips at https://tips.fbi.gov/. If you are overseas, you are asked to contact to the nearest U.S. Embassy or Consulate.
Posted by Paul Davis at 4:16 PM