What Role Did Transgender And Military Cultures Play In Philippines Death? 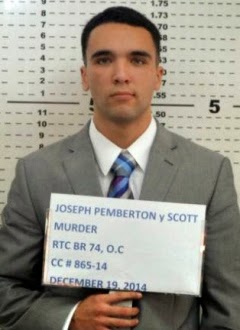 I've been following closely the murder trial of U.S. Marine Joseph Pemberton (seen in the above photo), in Olongapo, as I was a frequent visitor to this wild city in the Philippines when I was a young sailor serving on an aircraft carrier during the Vietnam War.

Seth Robson at Stars and Stripes offers a piece on the trial and a clash of cultures.

SUBIC BAY, Philippines — Marines and sailors are pretty eager to blow off steam after weeks at sea, particularly when granted liberty in an exotic port with a notorious reputation for easy female company.


While troops get briefings before going ashore on what to expect and what to avoid, some information may have gotten lost over the two-plus decades since the U.S. military left U.S. Naval Base Subic Bay: Not everything is what it seems in Olongapo, the city that sits just outside the gates.
Marine Pfc. Joseph Scott Pemberton, a 19-year-old anti-tank missileman based at Camp Lejeune, N.C., who enlisted in 2013, was among those who flooded out of the USS Peleliu last on Oct. 11. He joined a few buddies at the Ambyanz nightclub on Magsaysay Drive.
By the time the night was over, transgender Jeffrey “Jennifer” Laude lay dead in a bathroom at the Celzone Lodge, a seedy hotel across the street from the nightclub.
You can read the rest of the piece via the below link:
http://www.stripes.com/news/pacific/what-role-did-transgender-and-military-cultures-play-in-philippines-death-1.339491
Posted by Paul Davis at 12:50 AM