U.S. Marshals Coordinate the Arrest of 307 Fugitives to Honor Victims of Crime 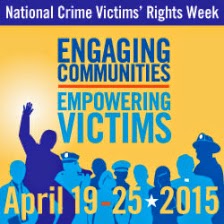 The U.S. Marshals Service released the below information:

During this time period, Task Force members made a concentrated effort to go after the most violent career criminals and gang members across the state of Arizona in line with a National strategy. This strategy was not about increasing arrest numbers, but rather an effort to further protect communities by targeting the most dangerous felony fugitives. The approach was quality versus quantity and was strengthened by working with our law enforcement partners to get the worst of the worst fugitives off the streets.

This apprehension effort was designed to coincide with National Crime Victim’s Rights Week. Since 1981, the U.S. Department of Justice’s Office for Victims of Crime has observed an annual week of remembrance for victims of crimes. Since 2008, the U.S. Marshals Service in Arizona has coordinated targeted law enforcement partnerships to seek out and arrest fugitives, thereby ensuring the justice process continues unabated in an effort to bring closure to the victims of crime. While the U.S. Marshals Service targets and prioritizes the worst of the worst every day, operations such as this allows valley law enforcement agencies to come together in a focused initiative netting hundreds of arrests which diminishing resources does not allow to take place on a daily basis.

"In the last 7 years that the U.S. Marshals Service in Arizona has been conducting these interagency fugitive apprehension programs, more than 35,000 felons have been arrested,” said U.S. Marshal David Gonzales. “By taking these criminals off the street we have made our communities safer. Federal, state, and local law enforcement agencies will continue to combine resources to deal with the problem of violent and career criminals".

This initiative proved effective here in Arizona with arrests totaling 307 throughout the state. Of that 307, arrests included 44 for Murder/Aggravated Assault, 23 for Child Abuse/Molestation, 21 for Sex Offenses/Sex Assaults, and 17 for firearms related offenses. This was a strategically focused approach through the use of the U.S. Marshals multi-jurisdictional investigative authority and its fugitive task force networks at the local level. The following arrests are examples of the type of career criminals and predators focused on during this operation:

- David Ponce, 39, was wanted by the Peoria Police Department on nineteen counts of Sexual Conduct with a Minor, Child Molestation, Aggravated Assault, Sexual Exploitation of a Minor, Furnishing Harmful Items to Minors, Kidnapping and Surreptitious Videotaping. Ponce had been on the run for approximately ten months and it was believed that Ponce had fled either to Mexico or California. On April 13, 2015, information was developed indicating Ponce was in the Southern California area. On April 14, 2015 Ponce was taken into custody in Los Angeles.

- Jose Araujo Flores, 18, was arrested in Phoenix on April 13th. Flores was wanted by Phoenix Police Department for his possible involvement in the shooting death of a rival gang member. It is alleged that Flores, a documented member of a criminal street gang, and four associates got into an altercation with three members of another rival street gang. Flores was seen leaving an apartment complex in Phoenix in a vehicle. Flores was taken into custody without incident.

- Christopher Handy, 28, was located and apprehended in the area of 19th avenue and Northern. Handy was wanted by Mesa Police Department on Probable Cause for Home Invasion, Aggravated Assault and Kidnapping. Handy was observed walking on the sidewalk and ignored commands made by law enforcement, continuing to drop his hand towards his waist. Once Handy was placed in restraints it was discovered Handy had a hand gun in his waistband.

- Alex Mundo Lara, 28, was arrested in North Carolina on information provided by U.S. Marshals in Tucson, AZ. Lara was wanted on a warrant issued by Pima County Superior Court charging Lara with Murder in the First Degree and Attempted Murder in the First Degree stemming from a drug related shooting that occurred in Tucson, AZ. During a drug transaction with the victim(s) an argument occurred and Lara produced a handgun. Lara shot the victims several times before fleeing the area.

"This multi-agency approach to apprehending violent offenders in our community has proven to be a successful method of focusing resources from various agencies towards one common goal,” said Chief Sean Duggan of the Chandler Police Department. “With every apprehension the victims of crimes in our communities can be reassured that the offenders are off the streets making our City a safer place for people to live, work and thrive.”

“This operation is a clear illustration of how effective Law Enforcement can be when they work together towards a common goal,” said Chief Larry Hall of the Buckeye Police Department. “Criminals know no boundaries and Law Enforcement must constantly adapt to the criminal element in order to be successful and better protect our citizens. This partnership shows that we did just that.”

The United States Marshals Service is the nation’s oldest federal law enforcement agency. Annually, U.S. Marshals arrest more than 50 percent of all federal fugitives and serve more federal warrants than all other federal agencies combined.
Posted by Paul Davis at 6:53 AM